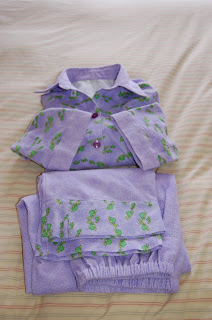 I finished my purple flannel pajamas today and just in time. The sleeves of my shower curtain PJs are only elbow length because that's when I ran out of shower curtain. We heat with the woodstove, but Ian had to finally turned on the furnace for a while this morning. I need warm PJs. I used to sew all my clothes but haven't made any in at least 20 years. I can see that more sewing practice is required before I cut into handwoven cloth. 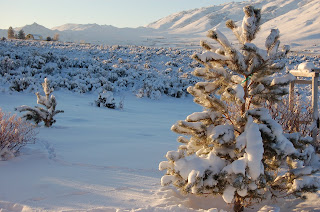 It was -9 this morning when I took this picture. Ian gets up before me and said it was -14 then. Today is supposed to be the last really cold day and then we will be close to freezing the rest of the week. That's when the dogs will start tracking in mud - good news, bad news. 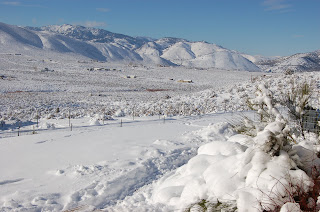 By this afternoon it was a winter wonder-
land, that is, if you got to stay inside. DD Chris got stuck in her driveway with the front wheel drive wheels frozen in the gutter. We IMed for quite a while but came up with this solution: towels in front and behind front wheels, then rock the car back and forth to break the inertia. It worked and she cabled her tires right in the middle of the street. Even so she almost got stuck going back into the driveway. Ice is treacherous! I feel so much better, knowing that she is driving on cables. 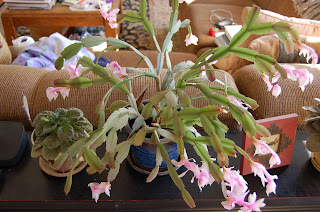 I've been wanting to show off this specta-
cular Thanks-
giving cactus - it almost looks like an orchid. The starter was a gift from an elderly neighbor, one of the first to build out here, and wonderfully welcoming of us when we came. She died two years ago and I enjoy having this memory of her. 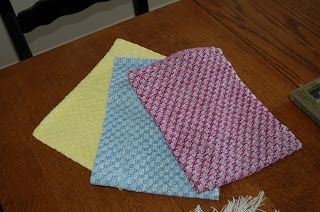 I have another memory that I am honoring. These towels are the first project to come off of Goldie. They are going in the mail on my next trip to town. Not quite two years ago I received an email (I'm the email contact for our guild), asking if I would advertise a loom for sale. Instead, I bought it. I had several email exchanges with Ken, the widower, and learned that he and LeeAnn had bought the loom in upper state New York and that actually both of them wove on it. He as an engineer liked the design process and she enjoyed weaving.

They had both retired from California and bought a new home in Gardnerville, which is south of Carson City, Nevada's capitol. They had been in their new home three months, ordered new furniture which hadn't even arrived, when she was killed in a traffic accident. The loom was still packed from the move. DS Josh was going camping in that area so went by and picked everything up and put it in their 5th wheel. Ken asked me if I would consider gifting him the first project that I wove from the loom. I said yes, but never seemed to find time to weave while I was working. 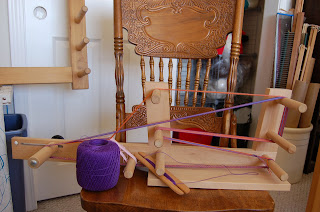 Ken included a lot of stuff and initially I gave some of the extras away. The whole box of yarns went to Virva, a Finnish weaver who lives at Lake Tahoe, and I forget where the frame loom went. But then I stopped thinking about it as time went on. I had woven a couple of samples on Goldie, but I feel the Texsolv heddles are what really made her mine and allowed me to enjoy her. Now I'm back to thinking about it.

This Schacht inkle loom was part of the package. I even took a class, but never even finished my project. I realize that I'm just not interested, so I asked Amy if she'd like it. She teaches inkle and could use it for a student loom. She said yes! I sent the wire heddles last week to Bonita for use in her student studio. LeeAnn's warping board went to Jeanne - why do I need two? I think the only things left to disperse are the books that Ken included. He and I are both excited about the towels - a promise kept. I just wish I would have used another color besides yellow. Deb Menz says a little yellow goes a long way. Why didn't I listen?!
Posted by Sharon at 4:24 PM

Wonderful snow pictures... postcard perfect! I will be happy when the temps are back in the 20s-30s... just too cold. I love your new jammies though! Good job on dispersing the weaving supplies... I am thinking about destashing and decluttering quite a bit over the winter and appreciate the inspiration.

Love the cactus, such a pretty color.

The story of Lee Ann's loom made me cry. You are a truly good person.

Great PJ's! You sure needed them yesterday. That's cold! You keep it, I left those sorts of frigid temps when I left New England.
That's a darn sad story, but so nice that parts and parcel of the weaving stash have been shared and enjoyed. I like the yellow towel, sometimes, a lot is just enough and it sure is a happy towel. One that I would reach for again and again.

I like the yellow towel too!! I think my kitchen might feel gloomy at certain times of year so bright color in there can be nice.

That is quite the story about how you obtained your loom. It's great that you have towels to give back. I'm sure he'll really appreciate them.

I think I want to follow in your sewing footsteps. PJs are a great project because they don't demand perfection. Love the color you picked.

Brrrr - if it's that cold where you are, we might get some cold later in the week. We're already getting more snow today.

Really pretty PJ's! And thanks for the idea. I can never find the sort of pj's I like in stores or in catalogs. As soon as I get my sewing machine back from my daughter, I shall start working on jammies. Shouldn't even require any sort of pattern.

I'm partial to the yellow, too. It fits nicely with the other two towels.

The jammies are lovely! Just remember, when you are ready to use the handwoven, you will want to use a tried and true (TNT as I have come to find out) pattern, one you have sewed and fit and tested many times. Not that I would know anything about a dress made out of (too expensive) fabric that didn't quite work out.

I love the yellow towel - it is so cheery looking!

The cactus is beautiful - I haven't seen a big pink one like that.

I'm with you, flannel PJ. Next to my flannel sheets they're the best.

We've only gotten flurries and lots of wind so far.

I love yellow too. Bright and cheerful.