A Whole Lot of Spinning Going On 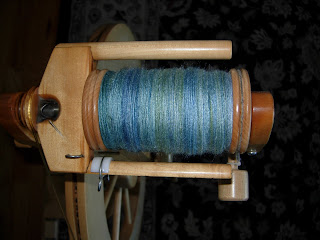 I finally finished the silk that I have been spinning in the mornings for the past several weeks. It took forever because I wanted to spin it thin enough to Navajo ply. When I first learned the technique, I thought it was Rainbow ply and I still think of it by that name. It seems apt to me. 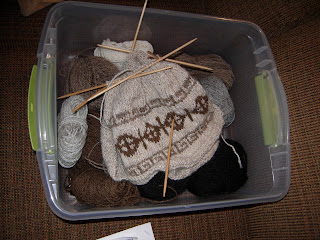 Then I decided to spend a few minutes finishing up the hat that I was commis-
sioned to knit several days ago. The skein ran out and I realized it was the last one. Ordinarily I wouldn't feel compelled to make a hat so fast but last night was the third at below zero. Liz works at the Red Rock Hounds horse stables and I know she really needs it. She moved here from Santa Monica this year and is especially struggling with the cold. I have knit hats for a couple others at the stables and they suggested she contact me. It took me about an hour to make this skein and in doing so, I realized that I only have one more bump of Mickey. I have three of his fleeces in the garage. Someone needs to skirt them and send them off for processing. I chose Mickey for her hat because his fleece is the softest of our wethers. I love to spin Shetland, but that was a whole lot of spinning for one day. The fulled skein was dry this evening so I went back to work. 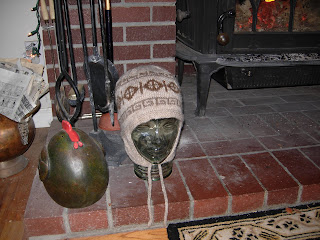 And here's the completed hat, roasting by a not-open fire. Interest-
ingly, the browns are both from Ollie, whose lovely cocoa brown is fading into coffee au lait with age. I'd call it graying, only it's not gray. That leaves tomorrow for laundry and weaving - maybe shoveling snow, since it's forecasted again.
Posted by Sharon at 7:55 PM

The hat looks great! So warm. I can't imagine being transplanted from Santa Monica to below 0 temperatures. My SIL is a native of MA, but has lived in CA for about 15 years. Whenever she comes back for a winter visit, she can't believe how cold it is here.

Whoosh - the sound of your spinning talk going right over my head. I can say the yarn is beautiful and that I envy spinners for the beautiful yarns they create. And that I'm afraid my ability to complete projects would come to a complete standstill if spinning were a requirement for them!

Congrats on finishing the hat!!!

What a great looking hat! She'll love it. Okay, I can't imagine spinning fulling and getting the hat finished all within a day. You are Super Knitter I'm sure of it!

Even the hat looks like spinning wheels! The silk looks luscious. This cold weather sure inspires the fiber person, doesn't it.

What a beautiful skein of yarn.....your spinning is lovely.

I am so hoping I can get past the shoveling, wood splitting and lugging-in, etc. so I CAN spin, or try learning to knit socks (rank beginner)...of course working hands might help. ;)
What a neat hat. I hope the person receiving it will appreciate the care taken, from sheep to maker to giver, that went into it.
(sigh) Someday, maybe I can knit like Sharon. :)
Give Charlie a noogie for me!

That silk is beautiful. Gorgeous blue, and I think I detect some hints of green as well. How do you use pure silk -- weaving? knitting?

You are very productive under pressure! Have you ever made hats from not-soft yarn? I have some, and wondered if I could line it or something.

And yes, Ollie is greying, even if it doesn't turn "grey." To go grey simply means to add white fibers to whatever color you started as.

Your spinning is beautiful!!!!

I love the hat. Browns are such rich colors. I've never spun shetland. I need to put that on my list of fleece to buy. Looks so yummy.

Too bad I didn't know you had changed your mind about knitting hats for others, I just bought two commercially made alpaca caps, but I would rather have paid you, you do such nice work.

That hat is beautiful - and I just love that glass head - what a fun thing to have to model your hats on. T.