Getting Ready for a Rag Rug 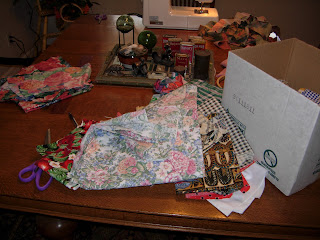 I have saved this box of scraps for probably 20 years, thinking that one day I'd piece these together into a quilt. Then when I started following Hilary's blog, Crazy as a Loom, and saw her gorgeous rag rugs, I knew that one day I'd like to make one of my own. Hilary said that when I was ready, to let her know and she'd help me. Yesterday was that day. 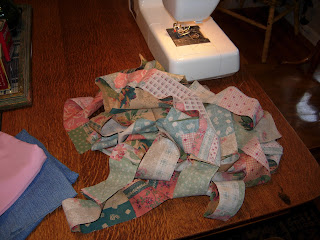 I emailed her in the morning and just about the time I was starting to fix my lunch, I saw that she had replied and was only going to be in her studio a few more minutes. It's that three hour times differential, you know. I called the number she provided and got a busy signal. I had missed her for the day and knew that she was planning an evening with family so replied with my phone number and crossed my fingers. She called from home about 15 minutes later and spent a half hour on the phone with me, answering all my questions and told me things I didn't know I needed to know, like - you need a temple! 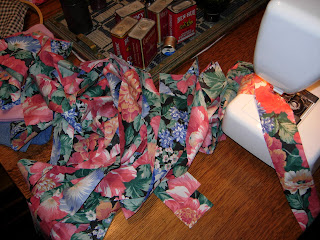 I didn't realize that she had a website but by the time she called, I was surfing it, so she walked me through the rugs and what created the effects. She also told me in her email that she had a tutorial on preparing the strips which you can see here. I sewed my first strips together at right angles, then went back to read her instructions again and saw that she said to hold the strips at right angles. Rip out, re-do. By today, I was getting the hang of strip assembly. She says just to keep sewing and not even lift the presser foot. I didn't take her advice at first, but it works much better if you do. 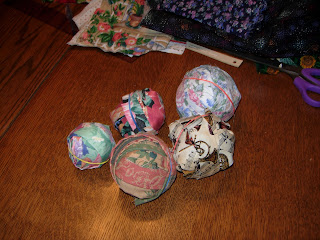 For my soft cotton, Hilary told me to cut the strips 2" wide and then fold them in half while rolling them in a ball - easier said than done. Mim was over for a while today and ended up folding and feeding the strips to me while I wound. Mim said to save my strips and the next time I come over we'll wind them all at once. This is the sum total of my work so far. Oh, and I did take Hilary's advice on the temples. I ordered two!
Posted by Sharon at 4:30 PM

Looking good!!! Make sure to twist your strips of fabric to see that they aren't bigger than a size of a pencil.

The strips look great! Certainly you are much more careful than I am. Isn't Hilary's site wonderful, both of them!

Cool that you're starting a rag rug!! And glad to see your "in the trenches" view of what it's like to prepare the strips.

So many weaving things to try!! Good luck!

Wow, great site! I wish I'd found it earlier but am glad you did and passed on the links. I'm still cutting strips for my rag rug, to be begun if I can ever get to my loom again. :)