Be Careful What You Pray For

You know how we always joke about - Be careful what you pray for - you might just get it? We've been in a long drought in the West and "pray for snow" has become a standard byline for skiers, and everyone else for anyone for that matter. 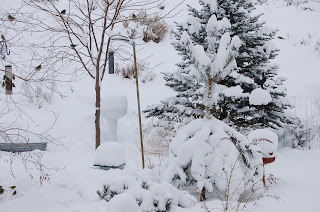 We got it in spades, but we didn't pray to get it all in one day! It started falling last night and this morning, the schools and all government offices were announced closed. The University was the last to determine closure, a huge relief to me since my daughter works there and was trying to get cables on her car. A foot of snow is a fourth of her car's total height! 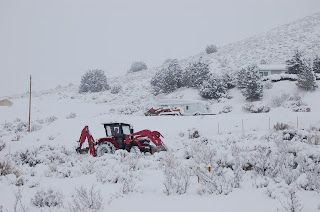 Our neighbor Tom called this morning to say that he'd be making the old fogies run for all us senior citizens, clearing driveways so we could get our cars out. He loves to play with his tractor and we appreciated the offer. Snow is forecast for all week. 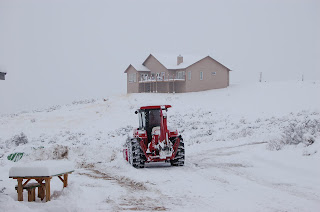 He did in a short time what would have taken us a very long time. He's an awesome neighbor. DD Chris says he is the best. Ever. I had to move to the hinderlands to realize genuine neighbors - the kind where you go inside each others home and talk on the phone. Ever.

I started winding a warp this morning, but decided instead to work on my practice sewing. It seemed likely the power would go out, so I decided to sew until it did. It didn't. It's dinnertime now and 14 degrees outside. More sewing tomorrow~
Posted by Sharon at 5:30 PM

Serious snow all of a sudden!! I'm surprised ours is still with us tonight. I guess winter is really here!

Good neighbors are a wonderful blessing!

Well, it's just as cold here but no snow. Thank goodness for small favors! Glad you kept your power; I'd be in a world of hurt here as cold as it is if the power went out. I guess Rick would be giving me long-distance lessons on how to use the generator!

Brrrr - no snow here either - but it's cold & windy. The boys are going nuts and breaking everything they can get their heads on - even thru the electric! I think two of them are going to the auction next week :-( If they'd only behave themselves! I hope all is well in your snowy world. T.

Oh I'm so happy I don't have to work tomorrow!! Nurses have no snow days in Reno!
Barbara

How long does it take to make pajamas?

Vicarious seasons! Much as I miss real seasons and snow, I was thinking tonight that I'm glad I don't have to worry about the warmth and safety of a couple hundred chickens, a few dozen rabbits, three cats, a hound, and a mare... Nope, all I had to do tonight was walk a few feet out into the yard and pick half a dozen lemons in case we get frost.

LOL, I think you got our snow. We've been missing it
but now that it's there you might as well keep it.
It's 3 degrees here this morning, Bob the tractor is going to be cranky (literally) to start!
Beautiful pictures and yes, good neighbors are the best!

And you didn't even have to think about driving to work as you watched it come down!! How cool is retirement!!?

I may have added to the abundance of snow there. I have been praying for snow. Maybe some wires got crossed? You have my snow! Can we please have some? lol! Great having REAL neighbors isn't it? We had them in PA back in the 80s when our boys were babies. Then for four years living on a Navy base near Memphis in the late 80s early 90s. Nothing since then. I long for a small town in the country where people really do care about you. You are very lucky!

Send Tom this away would you, Sharon? We got 30 inches of the white stuff with the storm that moved through here. Our power kept going on and off last night making us very, very grateful for the woodburning stove.
I'd better stop reading blogs and get suited up to do battle with the front walk, then out to the barn. Glad I fed the sheep very well last evening. ;)

The snow arrived here early this morning. It's beautiful but treacherous! Stay warm, be careful!

So pretty as long as it stay away from me. Think we'll be for some of that soon.

I've been watching the weather in your neck of the woods. Yes, thank heavens for neighbors who have backhoes and love to play in the snow.

Well, there's always "When it rains it pours" or snows as the case may be. I'm glad you didn't lose power. That's such a nuisance.

DEEP END OF THE LOOM said...

I know snow is a PITA but I love the way it looks, especially since its going to be 88 F today, yuck I want it to end.