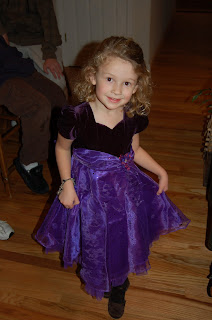 Christmas was very different this year. It's the first time since DS Josh was born in 1971 that I've celebrated it without him. His family is creating new traditions in Oregon as we are here in Nevada. We have always had our family for Christmas Eve, including DIL Missy's family. We knew it would be small so Ian invited several neighbors. They were alone and were thrilled to share the evening with us. Alexia taught herself to courtesy from a movie. Without having to share the spotlight with her cousins, she decided to it must be all hers, which it was. 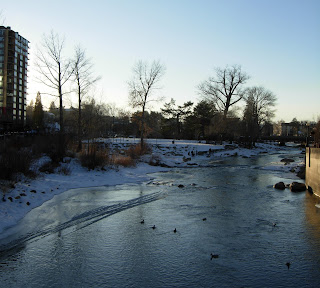 Christmas Day was an empty canvas since our Christmas dinner has moved to Oregon. We ended up going to a matinee showing of Avatar at the Riverside Theatre. I really like to watch my movies at home, especially when they're three hours long, but I have to say - it was Ian's idea and it was a good one. Good movie - followed by pho at our favorite Vietnamese restaurant.

This is the Truckee River, which runs through the center of Reno. How do those ducks do that?? It was 19 degrees when we came out of the show. I finished Christmas day by a reading a book until I was done. I'm a slow reader so it took me the rest of the day. I don't often take a large block of time to read so felt like I was indulging myself. 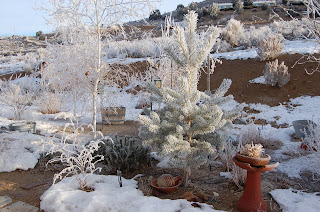 We woke to Pogonip today, which is an ice made of fine crystals suspended in the air. I think it has a fairy quality. It was 12 degrees when I took these pictures at 9:00. Few days this month have even reached freezing. 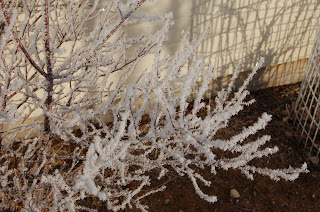 The crystals remind me of flocked Christmas trees and they cover every-
thing, including the fences. 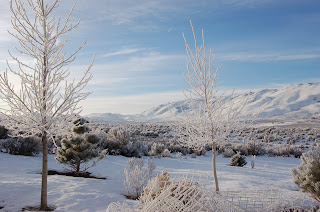 This is now already a record-breaking cold December. I believe in climate change. It is gorgeous from the living room, but this valley was once a working cattle ranch. I cannot imagine herding cattle on horseback in the this. I'm can't imagine me on horseback, but that's beside the point. 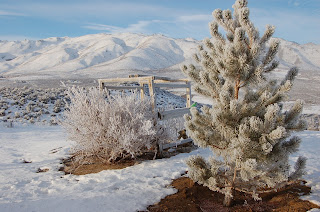 I haven't Photo-
shopped this. What you see is what you get. I got to talk to my grandsons just minutes ago and had a 15-minute conversation with six-year-old Evan. It was a hoot. We're re-sculpting our traditions and the new ones, though strange and unfamiliar, are good too. It's snowing again now. I'd be okay if that weren't part of the tradition.
Posted by Sharon at 4:59 PM

The pogo nip photos are awesome! We have had that along the rivers, though it is much warmer over here. Our 'traditions' have been all across the board for the past two decades, since both of us were divorced and needed to share the children with other families. It has taught us flexibility that has included 'rescheduling' Christmas Eve, or having multiple celebrations (as this year is).... love to you both as you create new traditions.

Sounds like you handled the changes this year with grace and hospitality. The pogonip is gorgeous, especially in the sun. We're sunny and cold here, the second days-long spell of such this winter; unusual for the Pacific NW!

Oh neat photos. pogonip, it would seem that ashland was shrouded in it yesterday, from freezing fog. maybe that's different but it looked the same.
You have had some snow for sure. We haven't had much this year, only needed to plow once so far.
Oh reading a book all day sounds heavenly, which book?
Glad you had a good holiday, different, but good.

Beautiful outdoor photos. I've never really seen anything like that.

We're having an oddly warm day with rain. I wonder if the snow on the ground will be gone by the end of the day.

It's great that you had so many years of the same Christmas tradition. Our Christmases are all over the map, so we're always trying something different. Some tries are more successful than others! Sometimes a Christmas movie sounds perfect....although I haven't done that yet.

I would love to lie in a hammock on a beach and read a book. But reading at home might get me part of the same effect, right??

Your snow and ice pictures are gorgeous. But I must admit, having spent many years in New England, I prefer to admire from afar. (Think I'll pull on my shorts and take a walk on the beach. heh)

We went to see Avatar as well, very good I thought, Derek was put out because they dis miners and the military, I just enjoyed the story and the CGI.
Glad you had a good Christmas :)

What lovely pictures! Cold looking but lovely all the same. Frost looks like so much lace, doesn't it?

I figure duck butts must be extra insulated or something. Brrrr!

Alexia is so cute! What a doll baby.

The snow photos are fantastic. Though I'm glad I'm enjoying them from here rather than close up and personal :)

We used to get the most amazing hoarfrost on the paper roll in the outhouse. Brrr!