Blowin' in the Wind 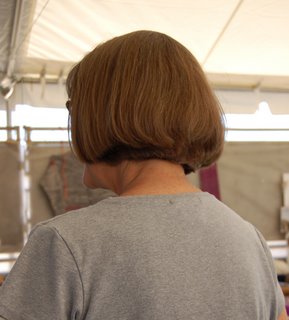 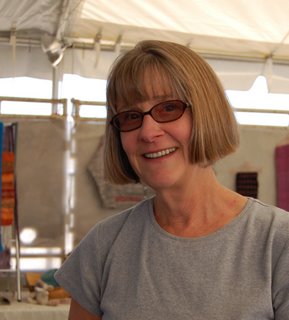 The first thing I felt after cut off my hair and washed what was left was a fresh tingling sensation on my scalp. The second thing I felt was remorse for not cutting it years ago. I started the morning at the Nevada State Fair about 8:30, left for the haircut, and by the time I got back, it felt so normal that I was taken aback when people either didn’t recognize me – short hair and out of context – or reacted to the change. I am already so over it. But like Amy says, I am now “renting my hair” in that I have to pay to have it cut every month. liked that and says he wants to make it into a bumper sticker. 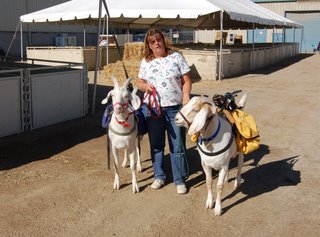 I love the agricultural part of the fair; I love the animals and I especially love the kids with their animals. There seem to be a lot of Nubian goats this year. I got a kick out of the pack goats and chased this lady down for a picture. My parents raised Nubians for milk when I was growing up and I have a soft spot for their quirky personalities. Our guild tent is quite large and stragetically positioned between the goat arena and the sheep arena. I am pleased to see the 4-H and FFA kids so involved with sheep this year. I don’t even know where the fair has the cows and horses – don’t care. Did I mention that I raised sheep in 4-H? And then there’s the potbellied pigs and their families. That is a whole other sub-culture that I just don’t get and didn’t take pictures. 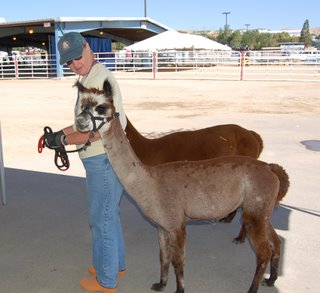 Karen brought a couple of her babies by while she was strolling them to help them socialize. The best part of the morning is the parade of animals practicing their people skills. We are fortunate to have a lot of fleeces from a large angora goat show, and the alpaca folks are well represented. We are going to have more fleeces at the sale on Sunday than buyers I’m afraid. Or maybe I’m jealous since I’ll be at work. I’m sorry to miss the awards for the new category, Grown in , a collaborative effort between a fiber producer and a fiber finisher.

The Fair has a new category for the 4-H sheep kids this year. It’s a costume show in which the kids and their sheep dress up. Do you get the idea that I love the kids and animals part of the fair? I think there were more adults running around with cameras then audience. In the end the winner was the boy who dressed himself as a hunter and his lamb as a deer, with the first runner up a girl who dressed as a cheerleader and her lamb as a football player. You had to be there. 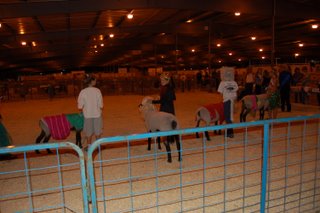 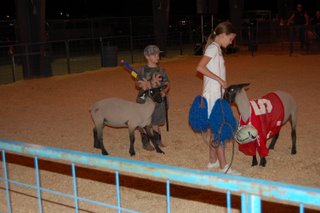 I was so ready to not like it, but your new 'do has you looking younger, refreshed to be shed the weight of the accumulation of it... I do agree with Amy about paying rent, though (unless you can teach Ian to cut it the way you want)