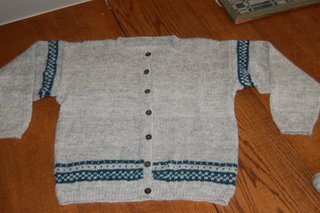 More than a year ago, probably closer to two, a friend asked me if I would be willing to make a sweater for her. We talked it over and I thought – why not? It’ll be fun. We talked about shapes and patterns. I was wetting my lips. I don’t wear the sweaters I knit for myself, so making one for someone else would be a challenge. Recently I heard Brenda Dayne on the Cast-On podcast make a reference to the one and only time she knit for money. She said she thought that she just didn’t have the temperament. I have discovered that apparently I don’t either.

Things that I would have let slide for me, I couldn’t let go for someone else. I’m pretty sure that by the time I tore out and re-knit problems, I had made the sweater twice. Now that’s done, on the other hand, the fabric is so lovely, it reminds me why I chose Shetland sheep for Ian to raise in the first place. I processed the wool myself so I wouldn’t lose the variegations of gray. The fleece comes my Mim’s ewe Nova, mother to my favorite wether, Mickey Mouth. I’ve been spinning his fleece this week, and I think it’s even nicer than his mother’s 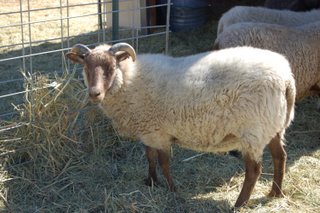 Okay, this is Micky Mouth. If he looks dorky to you, he looks lovely to me. And back to the sweater – I was anxious about the pattern I chose. Shoot, I was anxious about everything. As work progressed, I was anxious that I would run out of wool for good reason. I used Mickey’s wool to overdye for the contrast. It was frighteningly close. While Mim had more of Nova’s fleece, it was from a different year. When Mary and I made plans for the sweater, I knew that Nova’s fleece would be perfect. I just didn’t stop to think about how much of her fleece I had already used for other things. When the sweater was finished, I had 2 ounces of yarn left. And even worse, the skein on the right is only yarn I could use, because the larger ball was from a part of the fleece that hadn’t gotten as blended into the rest and was visibly lighter. I discovered that the hard way when two inches of lighter stripe on the sleeve had to be ripped out. 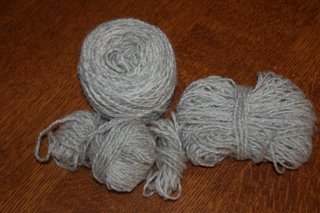 I am so relieved that it’s done. I don’t thing I could ever do it again. Yet I’m thankful to Mary for the push because I grew as a knitter and designer. I’m also glad the sweater isn’t not for me, because while it’s gorgeous, it would go in the top of my closet with all the rest of my sweaters.

You both have great taste. The sweater turned out beautiful. I don't think I have ever seen the yarn from your own sheep, that is so great.

It's beautiful! And as always, way more evenly spun than anything I manage to spin. Congrats!

As for knittling for money - I think it is a bit like the book reviews you had to do in grade school: Even if you have always wanted to read the book, it becomes increadibly hard to get through the moment it becomes compulsory.

I agree about knitting for money - there's no way to get repaid for the time involved, and it is hard on a person. I do make some small items to sell, probably could do more, but then it would take me away from the projects I am most passionate about.