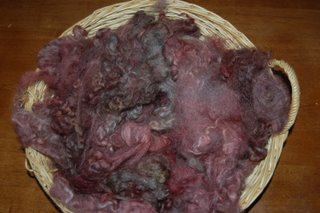 Laura was at our house overnight on her way from to her niece’s wedding. She’s been my guru for years. On this visit I learned how to make a dummy warp, and I also learned how to spin Romney more appropriate to the fiber. I spin everything to one size so I can use it with something else if I want. That doesn’t work with Romney.

I had a varigated gray Romney fleece that Ian bought for me from the wool auction at the Black Sheep Gathering several years ago. A friend and I had picked out a fleece that we saw Mark Iedman judge. We wanted to split it but both had classes during the auction, so we sent Ian. He used all his S.E.A.L. skills and came away with, not one, but three fleeces. I was a bit stunned, as the one I wanted was $12/pound. I hadn’t counted on the extras. Ironically, the two “extras” have been the winners. I still haven’t washed the one I thought I wanted. The Romney was from the Iron Water Ranch and is silky and lustrous. 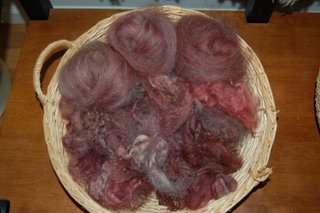 Last week when dyeing yet more yellow, I decided to add some of this gray to see if it would turn green. After an hour, I couldn’t see that the gray had any changes, so quickly dug through bottles of dye day remnants and found one of the Purple. I think all of my friends have a bottle of the leftover Purple from a dye day at Laura’s when she still lived here. Oh, what a dyepot it was - sigh. I poured the contents of my bottle into the nearly exhausted yellow, stirred it up and put the lid back on. More yellow was present than I realized, changing the purple to a dark mauve. The take-up was as sporatic as my stirring. When I first lifted the lid, I was stunned at how ugly it was, but then it dried and got prettier. One pass through the drum carder made lovely roving, and the results, now that I know how to make a lofty yarn instead of packing twine, are lovely and destined to be a felted handbag. 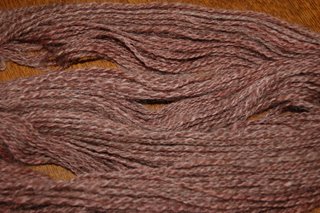 Your dye results are great and I love the color. Have you every used the magenta overdye technique? If you have yarns you want to use together -- but the colors don't go well with each other, put them all in a magenta dye bath together. You will be amazed! Doesn't matter what color they started out -- everything will now go together. I learned this from Molly Freeman and Sara Lamb.