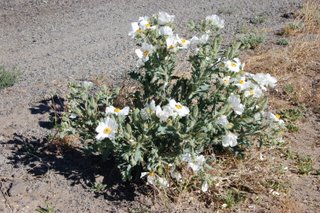 I couldn’t resist the look of Prickly Poppy. It’s such a prehistoric looking plant, with thorny stems and large flowers that look like fried eggs. I took the dogs with me in the truck to pick one pound of plant material. They ran all over while I delicately snipped pieces and parts into a five gallon bucket. Even with leather gloves, I got well acquainted with the origin of its name. 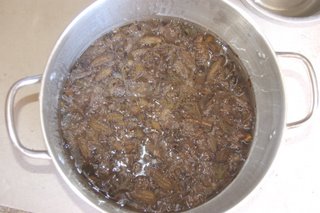 In one book I read on dying with native plants, the list included colors from cooking as well as decomposition. So after I cooked the plants for one hour, I left them in the garage for a week, thinking that I could deepen the color of my results, which according to Anne Bliss, would be chartreuse. I don’t know if the color changed as it decomposed, but it certainly did decompose. Laura took one look in the pot and suggested that I toss the contents 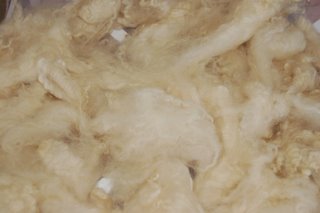 As you can see, I didn’t get chartreuse.

While Laura was here, she solved a mystery for me. A couple of years ago we bought a fleece from Anna Harvey and split it. When she moved to , she gave me her half of the fleece. Last year when I went to look for it, it seemed to have vanished. I pulled down two bins of washed white fleeces to show her how surprised I was that two Border Leicester fleeces from the same fiber producer were so different. Laura thoughtfully looked through them both, then picked up a handful of one and said, this is your lost Salish/Coopworth. While it was a nice laugh, it’s also nice to finally know what all of my fleeces are. This is an important step in my fiber reduction program. The set back is that I bought a CVM fleece from her, which at this writing, is in transit to me.

Can we try to set up some natural dye extract experiments at the retreat at the end of September? I am so ready to get some color variety! Someone said yesterday at the fair that the natural dyes fade more readily, I know that many are equally colorfast. Don't give up yet! It was so great to meet you and Amy.