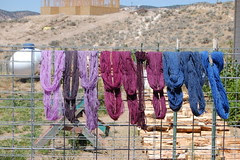 Dyed One-Balls
Originally uploaded by In Stitches.
Following my comment about all natural dye results producing yellow, Beryl emailed me with some wonderful suggestions, one I have already mentioned in the collecting of artesian well water. I forgot to mention that she also said that she has been satisfied with her results after she started collecting rainwater. But this is Nevada. First it needs to rain.

She also said that each yellow will be different so why not capitalize on that and overdye them with other natural dyes. “Then, you could take some of those yellows and overdye them with a weak bath of cochineal or madder or black walnut. I know yellow seems pretty mundane -- but look at it as a jumping off place.” I checked my dyebox and I have everything but black walnut. But first I have to card and spin the wool.

Somehow her comments about “jumping off place” spurred me to overdye a bunch of aggravating one-balls I have in natural colored wool – I don’t know what the fiber is anymore and there isn’t enough to do anything with anyway. So this weekend I decided to pull out my Gaywool Dyes and put these guys to use. It also helps diminish the clutter in my workroom. And I think I was able to dye enough luster longwool to make a felted bag like the one Sara did.
Posted by Sharon at 7:31 AM

Very nice! Your experiments make me even more interested in setting up some sort of a One-Ball Swap event.

Purple Fuzzy Mittens said...
This comment has been removed by a blog administrator.
11:51 AM

They also make me think "log cabin afghan", but first it would have to cool down:) I can start collecting some black walnut hulls for you - have done that dye before and love the mellow medium brown I got. Looks like you might have gotten spammed over the title of this post?

Isn't it interesting how we look at yarn in our stash and wonder what in the world to do with it because we don't like the color. Then, one day we realize we could dye it! I can't tell you how many times that has happened to me. Your skeins look wonderful hanging there in the sun.