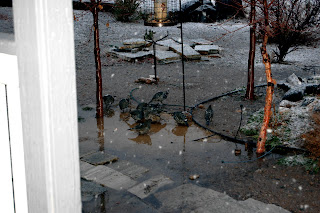 The rain just poured from the sky - not much sense walking on these stepping stones, but then it's not supposed to rain in Nevada. This was about noon yesterday. The quail are trying to retrieve what's fallen from the birdfeeder and now underwater - poor things. 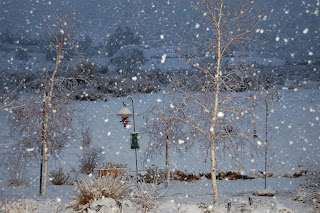 The snow was falling in earnest by twilight. Ian had gassed up the generator and from the NOAA forecast, we knew we could get several inches overnight. 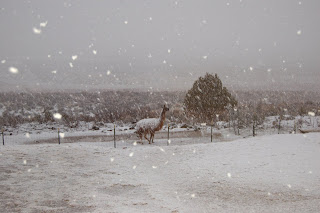 Zephie isn't phased at all- when ya gotta poo, ya gotta poo. Llamas care where they do it, unlike sheep. They're comfortable sharing the shed though when the conditions require it - good thing. 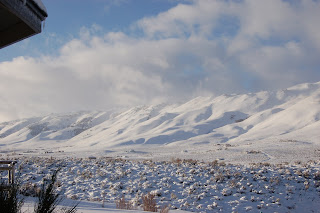 By mid-morning, we were in a winter wonderland, snow and sun - break out the cross-country skis, but I wasted the opportunity, dangit. 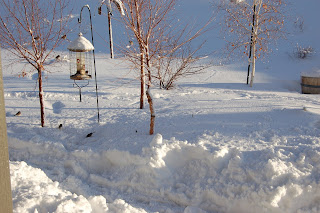 Ian dug this path for the generator, in the event we lose power. The power was off and on all night - no power, no water. 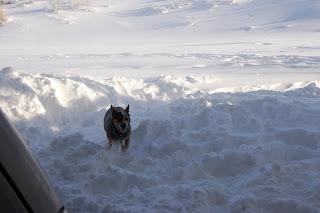 We've opened the garage door and that's my car in the bottom corner. We're trying to figure out how to get me out since I have to go to work tomorrow. Buster loves to scoop the snow with his nose and he thinks it's all a great game. He couldn't be happier - can you see his grin? 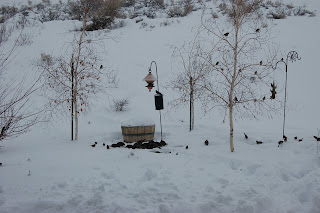 Ian refilled the bird feeders this afternoon. One was destroyed in the high winds last night and the birds are pretty frantic. In that dark clot beneath the tub are at least a dozen quail. It was twice that size when I tried to open the door quietly, but many were spooked and took flight. 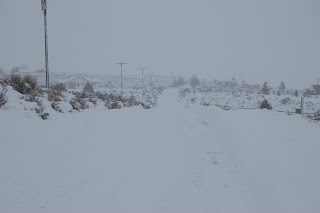 Our roads were supposed to get plowed this afternoon, but since I hadn't heard any plows, I walked up to see what I'm supposed to be driving to work on in the morning. I'm not encouraged. I'm a good snow driver and I have a great snow car, but I need a road to drive on, and I don't see one. 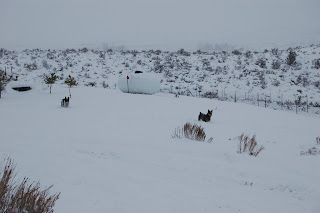 Do you see two doggies chest deep in the snow? The second wave of the storm has just begun, and while they're not ready to go back in the house, I am. I don't think we'll get as much precipitation as we did in 2005, but the snow is still falling and it's getting deeper every minute that I type. Visibility - isn't that a term for pilots???

My daughter's drive home from work yesterday, with my grandchildren, was another story....
Posted by Sharon at 2:33 PM

Good luck with the drive to work, ugh.

I have to work tomorrow also and am somewhat nervous about it. I am, however, a "towny" so shouldn't complain. Good luck. Maybe you can call in if the roads are too dangerous! Right now, I'm longing for our misarable hot summer!
Barbara

Beautiful photos! I hope you manage to get out on the road OK. All of our snow has melted.

Snow sure makes a landscape beautiful! We're still waiting...nothing much has arrived here. I hope it's not another dud for us.