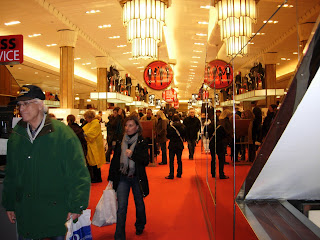 One of my destin-
ations was Macy's at Herald Square. This the main aisle of the main floor. Just inside the front door an employee at an information booth gave us with a map for all ten floors - you need it. He also supplied us with some interesting tidbits like the store occupies an entire city block and there are 6.2 million square feet on those ten floors with over 6,000 employees. 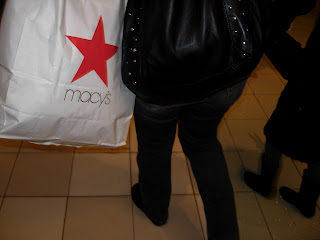 He also told us that the star logo dates from the 1850s when Rowland Macy founded the original store. He had been a sea captain and once when completely lost at sea, a star appeared to him and using it, he was able to navigate back to shore. He had the star tattooed on his arm and adopted the star as the store logo. Now you know. 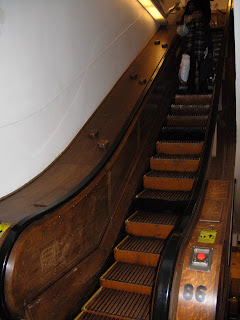 I love the architecture of New York's buildings. The exterior of the original Macy's is in the Palladian style but the expansion is Art Deco. It still has the original escalators, which we took all the way up to the 9th floor and all the way back down. The basement, called The Cellar, has a bar and grill. Amy asked what I bought at Macy's. A beer. 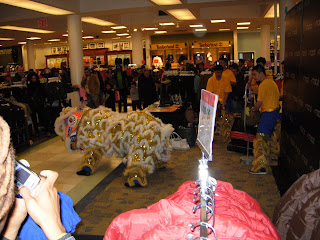 We were arrested on our trip back down the escalators by loud Chinese-sounding music. An upcoming show was putting on a performance in the Childrens department in advertisement. The dragon leaped around and shook with furry as the delighted children squealed and applauded. 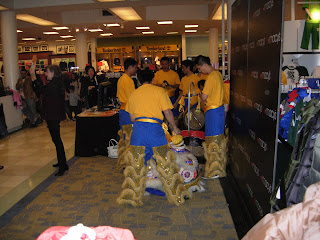 The musicians and dancers concluded the program and the shoppers and store returned to normal. Well, not quite right away. It was quite unexpected and we were surrounded by animated conversation, to which we contributed. 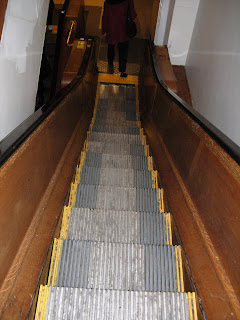 We resumed our descent through the bewildering maze of merchandise. The yellow strip at the bottom is the teeth which are about 8" long and intimidating. Now I remember why I used to be afraid of escalators when I was a little girl. Click for big.

We didn't have access to the Internet all the while we were in New York. We got home Thursday afternoon so after I finished all the laundry on Friday, I finally logged in and posted my first blog. Immediately our DSL went down - we just got it back this morning. I've never stopped to think about what the Internet means to me, but after nearly two weeks without it, I couldn't stop thinking about it. Last night when I wanted to look up Mariano Rivera to see where he was born, how old he is and his baseball history - well, tough luck. It's good to have my old friend back.
Posted by Sharon at 11:50 AM

We are such internet addicts that whenever we travel Jim tries to make sure we have free internet at every hotel or rental. (Once in the mountains of North Carolina, I thought he was going to go nuts because our cabin didn't have internet as promised. But he rigged something up within couple of days).

It is funny how you get so used to asking Google about the questions that you wonder about....at least the factual ones!

I'm FINALLY learning to turn to Google for things; for unbelievably long (considering how "connected" I've been) I just didn't think of it. And I definitely miss internet when I don't have it, because then I'm isolated from so many of my friends - like you!

I've never been to Macy's. Interesting historical tidbits. It reminds me of Marshall Fields in Chicago. We used to take the train into the city the day after Thanksgiving, and then go to Marshall Fields for lunch and Santa Claus.

I hear you about the internet! How quickly we become used to it as a lifestyle.

LOL, isn't Macy's great. It's like being able to shop and people watch all under one fab roof. I haven't been there in years. When I was small, we would take the train from Boston to NYC to see the Christmas windows. Parents and Grandparents...and a trip to FOA
Schwartz (sp?) was also included. ;-)

I've only been to local Macy's and never in my life reallize that the original was that large. Did you buy anything?

Completely understand about how used to the internet we have become. Even if the power is down I come into the computer room (do we reaaly have a room named after our computers?) to see if I got an email then realize the computer isn't even on. That just goes to show you how much it's become a habit for me.

Spending a rainy morning reading new blogs. Just wanted to let you know I stopped by. Looks like a great trip.