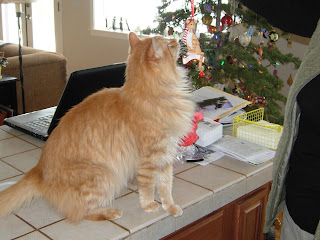 A package came in the mail for Charlie. It's the orange tabbycat ornament that I bought on eBay for this years tree. Yes, there are others. It's becoming a collection. What do you think, Charlie? 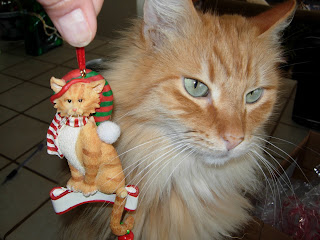 I do believe there is a resem-
blance, especially the 'tude. Charlie has claws, the ornament does not. Charlie is a sandy cat. Does that make him Sandy Claws? 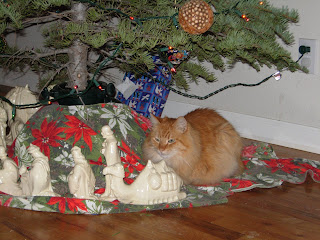 He's like, whatever. Leaf me alone, I'm in the forest. King of the foreeest - think Burt Lahr. This is closest this poor indoor kitty gets to sleeping under a tree. He loves his Christmas tree. There are no outdoor kitties in Coyoteville. No presents under the tree? Our family agreed several years ago that we would share ourselves, but no gifts, no January debt. 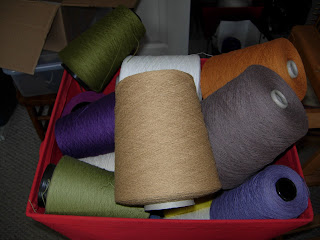 I got a package too. This bin is my sum total of dish towel cotton and it's all 8/2. I was going to plan another warp but I was waiting on a Webs order. I realized that I don't have blues and would like to see my new cones before I plan the next one. 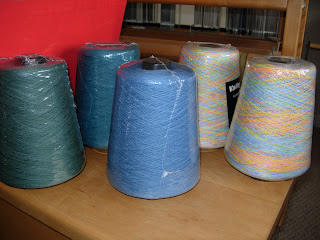 Charlie's package came yesterday and mine came today. I love the blues - don't know why I didn't think about them before. The variegated yarn? I have two babies I had planned to knit for, but I'm going to weave blankets instead. The first one is due in March so I have time to figure out what in the heck I ordered and what I'm going to do about it.

I have Missy's warp on Goldie. It's sleyed and I decided to warp in point twill, but when I got half done I realized that I don't have enough heddles. I have exactly 400 heddles and I need 402. I already knew I was going to make two at the end. I didn't stop to think that point twill uses more heddles on the middle two sheds. I pulled it all out. I had wanted to try a M and W threading and got my wish. Half of the warp is threaded in a variation. I could have been done - sigh.

Package #3? It it exactly six months ago today that I walked out the back door from my job and my work life to my new life in retirement, thanks to an early buyout package. I like all my packages but I LOVE this package the best.
Posted by Sharon at 4:24 PM

As fearful as I am of being sucked into yet another fiber hobby, I'm beginning to feel a compulsion to know the meaning of terms like "sleyed," "heddle," and "shed." Weaving is such a foreign language. I could just read a book about it. Might be safe.

Oh, and Charlie sure is one gorgeous cat. How does he contrive to look both royal and mischievous at the same time?

Sharon, why not just make a couple of string heddles, they'll hold fine for this. You can also keep on hand a few repair heddles. I think Webs or Yarn Barn has them, Halcyon etc.

Charlie is very handsome! All orange cats are Buzz would like you to know....

Next time, post a question on your blog. You could have just made two string heddles and saved undoing all that work.

Here's the only description I could find on the web. http://wovenfibers.com/tips01.html

Several of my weaving books have illustrations. Am surprised that I was unable to find one online.

PS..avoid purchasing the metal repair heddles. It's almost impossible to work that clasp over the heddle bars.

What a pretty cat. I don't often see marmalade coloured cats with the longer fur around the face and those lovely green eyes.

Baby blankets? How about waffle weave - takes 6-8 shafts, but it's cozy and warm, and, ahem, absorbant!

I think you have done an outstanding job at retirement! I look forward to seeing what you weave.

I'll bet you do love that retirement package best.

I think you got some of the same blues from Webs I did! Can't wait to see what you make of them.

Good things definitely do come in packages - we have that in common!!

Love the cat with ornaments and tree!! Very cool....especially that kitty face next to the kitty ornament!!

I have my eye on all projects that involve blankets, so I'm glad you're tackling baby blankets this winter!!

Heddle woes are such a pain!!!

Congrats on such a successful transition to retirement!! A lot of people have trouble with it - but I think you have skill and talent in this area!

Charlie is really cute, so photogenic. But it's those yarns I'm really drooling over.

I've made string heddles in a pinch. They weren't perfect but they served the purpose. Several weaving books give instructions for them.