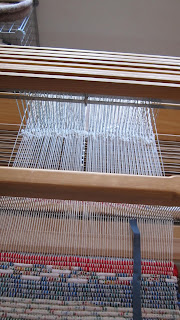 I was so close at the end of my warp - the blue strip represents how much I needed to weave and in the background at the heddles you can see the knots where I tied onto the previously existing warp. 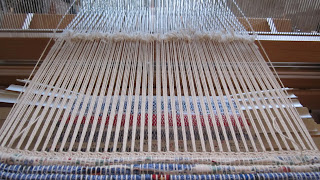 By the time I had done the hemstitching on the last placemat, that's all the forgiveness I had - maybe 8" or so. I'll add another yard to the warp next time. I would prefer more loom waste. This was too close for comfort. 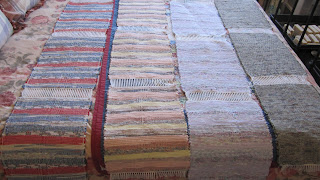 I washed the placemats last night in a continuous group and also dried them. The lint was prodigious. I had to empty the filter half way and still there was more lint. While they were still partially damp, I cut them into sets and laid them out to finish drying. 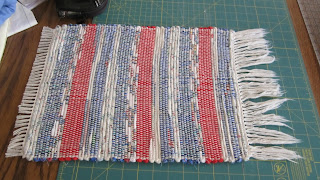 LouAnn at Loomy Tunes told me to tie the warp ends in overhand knots before washing. I forgot and this is why she warned me. 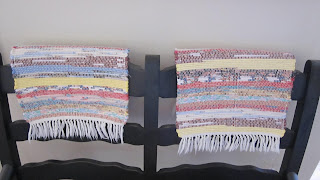 I threw the two placemats in the wash that we use all the time - I thought I should know what the fringe will look like so I can tell potential buyers. They washed up great! 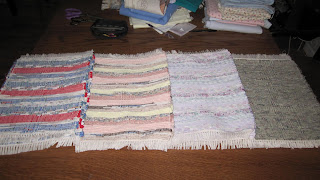 These are the finished sets and I am thrilled. The hem-
stitching and separating with a rotary cutter took away so much of the work. The set on the left is the "go loud or go home" change-up I made after Theresa's comment. 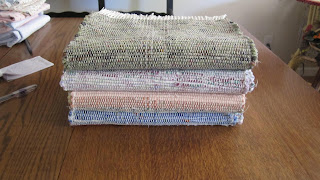 This is how I will have them on the table at the craft fair. There's no space to display them flat and this at least shows their color range. I was surprised to find that I liked the peach-colored set after all.

I'm no longer bothered by the traveling warp showing up as uneven threads. I think it demonstrates the personal part of me invested in the work - not hecho in china.

What a great run of placemats! I think it works well to have different color families to appeal to different shoppers. Are you ready to make another run????

Well now you know how close you can cut it with a warp and still be able to get a shed. Useful information when you have a limited amount of yarn that you want to use as warp! Make a note of it.

When I finish a weaving project, I usually sit down and write myself a note about the project: Lessons learned, what worked, what didn't work, what I would do differently...that sort of thing. That's in addition to noting draw-in, take-up, shrinkage, etc.

When I don't do that, I make the same mistakes over again....making weaving a Sisyphean task.

Those placemats turned out great.... I don't remember if you said how wide you cut your fabric or not. I do two inches for the rugs, but didn't know if placemats would be the same or a bit more narrow. The colors in the mats are great too!!!!

I have been known, in my energy efficiency (laziness) to keep weaving - pulling the knots of the dummy warp (they're not dumb...) through the heddles. On my loom, I get a shed unless the sky has fallen, so I can eke out the last, little, teeny tiny bit.

I agree with Valerie about keeping notes; however, I start keeping notes with the warp/weft calculations, threading/tie-up and a small draw-down. After the project is finished, I have either a picture of the cloth, or a sample. In a different color ink, I make final notes - what I'd do differently (like your longer warp comment).

Consider using a dummy warp for your placemats. I used a one yard dummy for a group of shawls that I wove once. This is where I learned that I could weave almost up to the knots! It saves lots of time after the first dressing of the loom.

Awesome placemats. Looking at them reminds me I need to get some new ones. If I get a chance to see you I'd like to look at yours.

They look great! I just love your weaving. A knitting friend of mine sold her drum carder so she could that money towards a loom. She showed us this fabulous purple woven scarf she made. It was to die for!