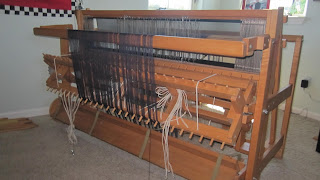 I went by Gail's before leaving town. Her new-to-her loom is massive. She had finished the warp to the point of tying on. I've been where she is and I know exactly how she feels. Weaving isn't hard but the steps can be confusing at first. 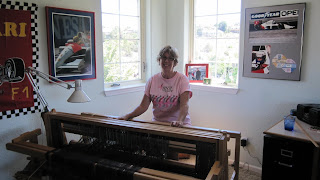 She has come a long way already and has carved out this corner of her husband's office for her studio. We discussed options - tying on versus lashing - and she called me this afternoon to say that she had started weaving! I feel like a weaving midwife. 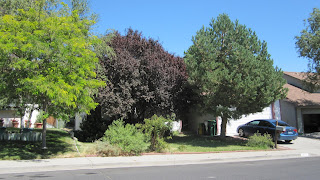 I didn't want to get on the freeway which is under major recon-
struction so took surface streets and ended up going by our old house. I actually drove by, then made a u-turn on Ives and went back for this shot. That pine tree was such a miserable little living Christmas tree that my kids dubbed it the Christmas shrub. No shrub now.

I joined the St Mary's Fitness Center on July 26th and am trying to get in to use it three times a week. Because I've been enjoying it so much, Melissa, who had dropped her membership because she never went, has rejoined. Friday we went to the gym together and on checking in, I was informed that I was entitled to a $75 voucher. Melissa had referred me as her reason for joining. Long story short, we signed up for three semi-private swimming lessons, paid for by the voucher.

So Sundays, I go to church, stop at the convenience store for a San Francisco Chronicle and then drive on in to the gym, which is why I was able to stop at Gail's. The swimming coach just happened to the staff person in the training room when I was there, so Melissa and I are officially signed up for our first lesson, from a Serbian Olympian swimmer and certified coach - yikes!

Yikes is right! They are a long way from home. I had a German riding instructor. I do really prefer to be yelled at in my own language, but I picked up a fair amount of German almost curse words, and improved my riding mechanics a lot. Have fun.

Ahhh... Another new weaver is bron. You did very well helping her. I wish her many, many happy hours of creating fabric.

I'm so glad you are enjoying the gym. I love mine and always look forward to going.