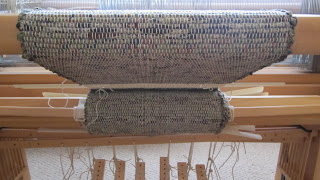 I've finished the first set and if they don't sell, I know exactly who will receive them as a gift. These are the colors of DIL Missy's kitchen. I'm proud of my kids for setting and eating at a table. It's becoming a lost art in America. 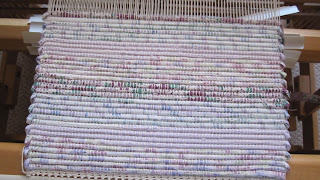 I chose lilacs for the second set, hoping to invoke a shabby chic feel. I'm afraid I second guessed myself because they're so washed out that they just look shabby. All the strips are cut, sewn and rolled into pinwheels so thus it shall be. 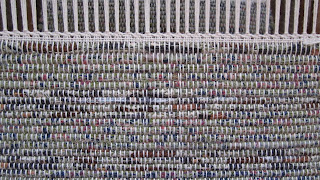 I'm so impressed by the finished appear-
ance of the hemstitch, with four warps wrapped in each section. I timed myself. It takes just six minutes to hem one edge. That is a fraction of the time the tied fringe took and much easier on my fingers, plus it uses less warp. I'm a convert. 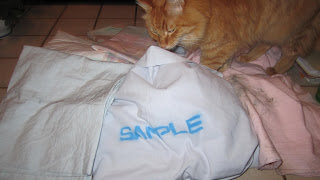 I went to Mill Ends Fabrics today. I thought I'd show you what rough condition some of the ends are in. The pink one on the right has blue dye splashed on it, the middle one is stamped "sample" and someone drove over the blue piece on the left. I spent $11 which means I got 11 yards. Plus Benita just said she's got more destash cotton to send me - wow!!

I was doing more fitting things into one trip as I was on my way to swim at the gym and then afterwards meet up with my friend Hermi who lives in Las Vegas but comes to Reno once a year for the Friends of Nevada Wilderness board meeting. We got sandwiches at Pub N Sub on 12th and Ralston, for you Reno folk, and then went to San Rafael, my favorite regional park nearby, sat at a picnic table under the tree canopy and visited to a couple of hours. We were roommates at a fiber retreat at St Mary's Art Center in Virginia City about five years ago and have kept in contact, thanks to the virtual world.

She's from Switzerland and at that time she was the only person I'd met who knits faster than me. I've since met Virva from Finland who also knits faster than me - those Europeans. Since the retreat we've also both become weavers so we brought some of the things we've been doing to share. I always feel like a million dollars when I climb out of the pool after a swim and then to spent a couple hours with Hermi made the afternoon even richer. 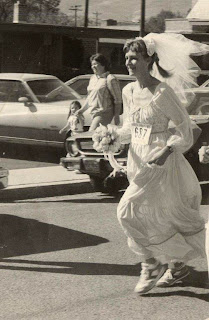 I came across this the other day when I was digging through folders, trying to find an email about place mats that I had printed from Hiliary and made notes on. I ran the Journal Jog, a local run fun, in costume and this picture was in the newspaper. I bought a print and gave it to my mother who "taped" it to the wall over her sink. It's a wonder it survived. It brought back a lot of memories.
Posted by Sharon at 8:59 PM

You've had a busy day but a good one I think. And your hemming is wonderful. I do hope you don't sell those place mats ;-) so that they are for your DIL hihi.
Here in The Netherlands, just like in America, people don't set the table that much anymore. I do, because My DH and I just love our china/crockery set? (we have several I have to admit)

Happy weaving and have a nice weekend.

I love the hem stitching, but no where near as much as I love that photo of you running.......now THAT should be framed......very cool.

What a cool photo!!! I agree with Hilary--you should have it framed! Your hemstitching looks great...I've never thought about timing myself. I'll have to try that!

Awesome photo! What a fun race that must have been.

The placemats are great. I agree sitting down and eating togethe as a family is one of the most important things you can do for your children. It's just Bill and I and we always sit down at the table to eat.

I timed myself hemstitching a place mat and it took me 30 minutes! My hatred of hemstitching at the Center is legend, but I agree, it's easier than hemming later. I've gotten faster, but I'm not up to 6 minutes yet. Love the photo! What made you choose the wedding outfit for the run?

You ran in a wedding dress?

Yes, I love hemstitching and how nice it makes the ends look.