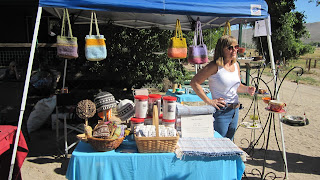 This was my portion of our booth - that's Kerry. It's the second time I've shared booth space with she and Carol. It has worked well and we're planning for the future. 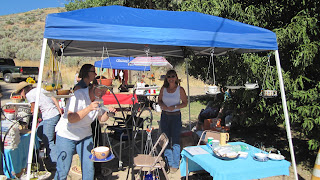 They make bird feeders from thrift store dishes - add wires and beads and they are fabulous. They sold seven while we were setting up from people milling around before the equestrian events even started. 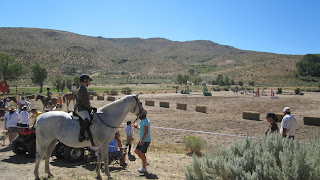 Yesterday was the hunter pace event and today the compe-
tition was jumping. The arena is at the very top of the property. 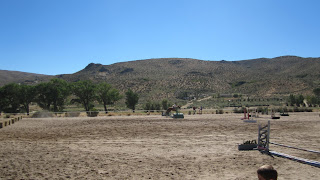 I was thrilled to catch this jump with my point-and-shoot camera. This is a junior rider. His horse balked at the first attempt, so he rode back around and did very well on the retry. 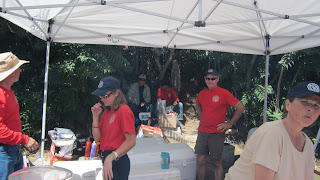 The VFD were there selling lunch - I got a cheese-
burger, chips and beer for $10.00. Bargain! The RFD put out a lightening strike at the foot of our property a couple years ago. The burger was dry but I'm not complaining. 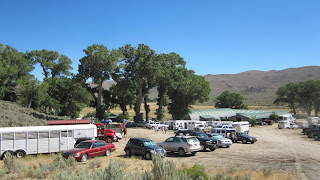 This is the ranch and the equestrian ring is where I'm shooting this picture from. Our craft fair tents are down there by the ranch house, on the other side of the cottonwoods. Carol, Kerry and I did well in spite of being at such a distance from the action. 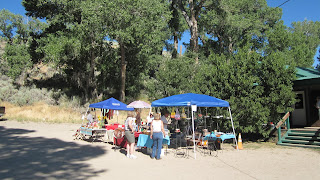 This is a first time event - we went from 8:00 to noon - just four hours, pretty early for me, but I'll be in line to do it again next year. The noon cut off is because that's when the winds kick in, and they were actually a little premature. We were ready to quit at noon!

I've never done a craft fair before where I sold no soap. We laughed about that a lot - hmm, why? It was so hot today - it seemed too early for hats, but I brought some anyway and was pretty surprised when Ron and Ali's daughter clamped one on her head and thus it was so. I was thrilled at the two placemat sets I sold as well as the interest from those who didn't buy - makes me want to weave!

Carol, Kerry and I need to pow-wow. In the meantime, I had a terrific time visiting with friends and meeting new neighbors. Is this a dream? Pinch me.

Well, it would be a dream for me; friends, horses, and craft fair all together! I guess I'll have a mini-version of that when Wanda Jenkins and I meet for a beach ride (she's bringing another spindle for me).

Sounds like a fun day! I'm thrilled that your placemats were a hit!

you mean no one was thinking soap with all that dust & dirt around? Those riders must have been pretty dirty at the end of the day.

I think it's interesting what will sell at different venues. You never know, do you?

It looks like you had a lovely day for it, and what could be more fun than watching horses get put through their paces?

What a perfect day it sounds like! 4 hours at the craft booth, some sales and friends. Your placemats are well made and lovely. It's great that other people appreciated them as well. Getting to see the horses was a nice bonus I think!

Oh boy, that arena certainly has me green with envy.
And the craft fair sounds like a fun time and good and short.
I'll bet soap might have moved later in the day, but congrats on selling some of your beautiful placemats.
Lucky buyers to get such wonderful handwork.