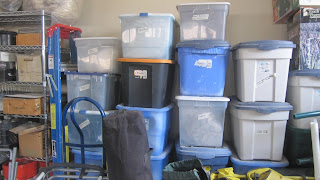 There it is, my 20 bins of fleece. Absent are three large cardboard boxes and another plastic bin. The left five bins are all Merino and the tallest stack is all Alpaca. Almost everything is processed except the Alpaca. I'm spinning the last couple of bumps of a Romney/cross from my brother's flock and was thinking this morning that I need to call Laura and get some advice on using the natural dye extracts I have. I swear two hours hadn't passed before she called to say she'd like to come down in May, could she stay here - eerie! And cool. 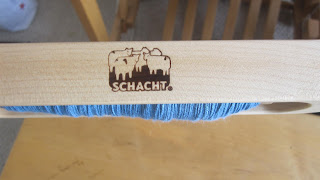 I wanted to weave the last towel on this warp with the end-feed shuttle and then decide if I was going to return it -give it another chance. The pirn was dangling. The instructions said that on top of almost never needing tension adjustment, the pirn adjustment was factory set and would be good for years, but over time if I needed to adjust it, here's now. My pirn was hanging out the bottom! Once I gave myself permission to plug my ears to their admonishments, I got the tension and pirn adjustments set and started the last towel. 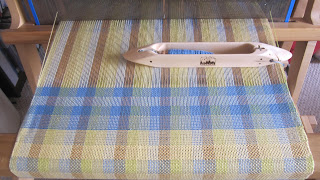 My biggest struggle the last time I tried this shuttle was having the shovel-
nose scoop the warp threads. Valerie commented that she throws her shuttle sideways to eliminate that. Ingrid emailed me this morning to say that she has the same trouble with her Schacht if she weaves too close to the reed. So taking those those thoughts in toe, and with the newly adjusted shuttle, I embarked on the last towel. Oh my goodness. It's like I've been driving a noisy Volkswagon Bug and suddenly now I'm driving a Lexus. Even Ian noticed the difference in the noise. There's no rattling bobbin as it unwinds before the next toss. It's completely silent and it uses so much less shoulder motion that it's even faster. It slides silently across the shuttle race, change shed and back it goes. A small thing, but I appreciated that there isn't a dangling loop of yarn to catch on things underneath. There's no way I'm sending this thing back!

The next warp is going to use five sets of colors, the good ol' Fibonacci way. I used four sets and it's an eye clunker. You can see it, right? Annoying.
Posted by Sharon at 8:50 PM

Hmmm, must get one of those shuttles!
I do like the towel!

I love the two end feed shuttles I have, glad you got this one working well for you!

I'm so glad you got the knack of that shuttle...I know some folks that LOVE them! You sure do have a few fleeces stacked up!!! Looks like a little spinning will be going on around there!

Oh thank heavens - I was afraid I had given you bad advice. Glad you now like your end-feed shuttle.

And I thought I had a lot of fleeces to spin up - you have me beat all to pieces in that area.

Isn't it great how God gives you what you ask for before you have the chance to ask? Have fun playing with natural dyes in May.

That is a LOT of fleece. Your weaving is beautiful, and isn't it great to receive good advice that pays off?

Yr wall of fllece makes me feel much better! Now if I can only refrain from buying at the Sheep and Wool festival! Yeah, like that's going to happen.