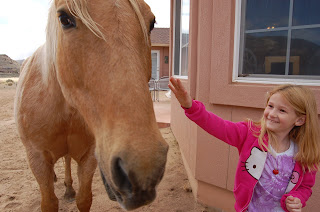 I had about a dozen apples in the refriger-
ator that had passed their expiration date so asked my neighbor Sandy if she thought her horse Oberon would like them. She said, you would have a friend for life! Alexia and I delivered them today. 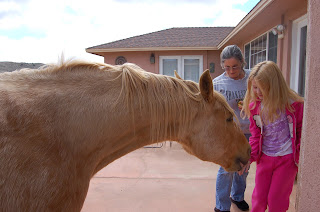 Every five minutes this morning I swear Alexia asked me when we were going. She had her heart set on making bread, but we were short on flour, which Ian had on his shopping list for town today - along with library books. So she shifted her focus to taking the apples to Oberon. Sandy cut up one of the apples into eights and Lexi was thrilled and nervous at the same time to hold out the pieces on the palm on her hand. If you're familiar with Shakespeare, Oberon used to have a companion horse named Puck (Midsummer Night's Dream). 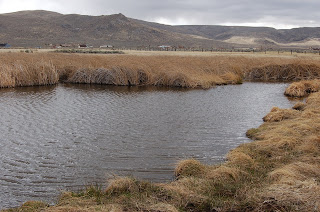 We had the truck since Ian took the car to town, so I told Lex that we would check the artisan spring in the next valley, see if any birds had migrated in yet. This spring is one of the inspirations for my towels but the greens are absent, along with the sun. 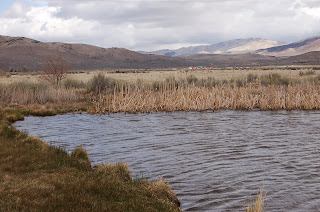 This picture brings in more of the greens but it's not quite the palette I had in my mind. I was torn between this memory and the tidal pools at Strawberry Point on the Oregon Coast. Maybe more tidal pool?

I have my warp ready to weave and will get to it in the morning, in between bread risings. Alexia finished one of her library books tonight, Junie B. Jones series by Barbara Parks and started another one - Papa brought her three from the library, so we'll both have things to do in between the stages of bread. She is very excited. I guess I am too, since my mother's bread baking is a fragrant memory for me. 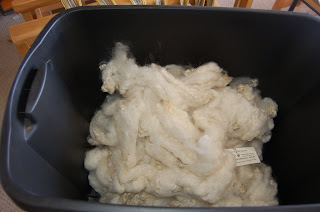 I couldn't do anything on my towels until Ian got home since I'd tasked him with buying a metal dowel for my apron rod. It will make for a better tie-on and I should have done this years ago. So while I waited I decided to drag in a bin of washed Border Leicester wool that I bought about a dozen years ago from Ralph Groefsma in Mountain Home, Idaho. It was before Internet all all done by postal mail and phone calls.

Diane Soucy turned me onto him. She showed me a yellow legal pad with taped-on samples of the fleeces he had available. I remember that day so clearly, at the newly opened In 'n Out Burger in Auburn. I called him and ended up with my own sheet of samples. It was my introduction to raw fleece. I have a couple partial fleeces left from then and I'm determined to weave lap blankets from "my wall of shame" - the bins in the garage that store fleece. I got to thinking that I could dye the gray that I've spun from a sheep out of my brother's flock and also a white from one of the many fleeces in the garage and get two different colors from one dye bath. So the gray is spun and the warp is chained. Now I'm back to the drum carder, not my favorite thing, and on my way to white yarn! I'm planning on a rabbit brush dye bath and anticipating green and yellow. We'll see.
Posted by Sharon at 10:10 PM

Oberon looks like he may have done the cut up apples from a child's hand a time or two before. What a good boy for reaching in so politely for his treats. Hope the bread baking is a rising success!

I can't wait to see the rabbit bush dye. We might have to do some dyestuff swapping - I wonder what grows here in Indiana that you don't have in Nevada... :)

Alexia is one lucky little girl! She gets to feed the horse (FUN!) bake bread (YUM!) and watch fleece turn into yarn (LUCKY!!!) She'll have so many memories to keep!!!

Looks like you're having another fun week with Alexia, she's treasure these times with her grandma, I know I treasured all the wonderful times with mine.

What a polite boy is Oberon! He looks like the perfect horse to give treats to. I'll have to ask what Rabbit Brush is and what colours you'll get from it.. I did google it but couldn't find a close up to see what it really looked like. Not a plant you'll find wild around here.
What a sweetie Alexis is! I hope she likes helping you for a long time. She'll have such a great foundation for hobbies and interests