A deYoung Kind of Day 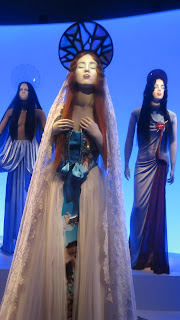 The one museum I wanted to see on our visit was the deYoung. I had looked at all the exhibition schedules and this most closely fit my interests. There are so many to chose from, it was hard to pick, but the Jean Paul Gaultier retrospective was the final straw. Everything about it was over-the-top. Why would it be otherwise?!! There were 140 mannequins and the display took the entire basement floor, room after room, after video display, after simulated runway show, to movie bits. It was fantastic. This is the first room. These mannequins are nearly life like by having blank faces but the animated expressions are broadcast onto them from mushrooms suspended nearby from the ceiling. Several of the mannequins throughout the display sing arias, which this one is doing - ethereal. 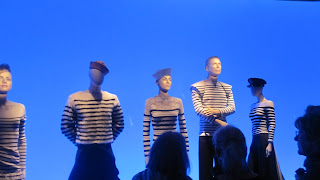 The mannequin on the right is Gaultier, talking in heavily accented English.

It was pouring rain when we woke up that morning and we felt smug in our plans to spend the day inside, knowing we could catch the bus under the bus shelter and walk there with our umbrellas. Both our umbrellas were toast, and since we don't use them in Nevada, we didn't know. We swam to Walgreens and bought two more. We then waited for the bus, soaking wet, with new umbrellas. We had raincoats, but when your hair is dripping, you're wet.

The museum would have been a ghost town, except it was a special day for people with disabilities. 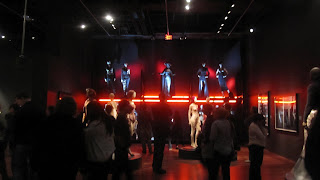 Downstairs it was a bustling business - I'd hate to see it crowded. Each room was a mood and theme, with the echo of singing mannequins. There were enough people but not too many. 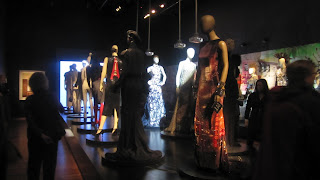 The museum created a specta-
cular simulated runway, and the energy from the public was palpable. His work is theatrical, overtly sexual, Madonna-ish, and entertaining. The Sunday Chronicle gave it a great review and it was ironic that I read the review after I had seen the exhibit. You know that won't happen again. 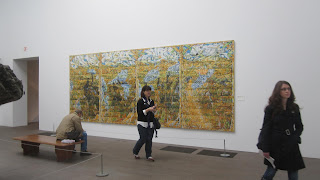 I almost didn't include this because I know this post is getting long, but I do enjoy art as a personal statement. This is called The Burning of Los Angeles, and in four panels of raw canvas, this artist painted a very energetic display of that desperate time. Growing up in San Diego, I remember the Watts Riots very well. 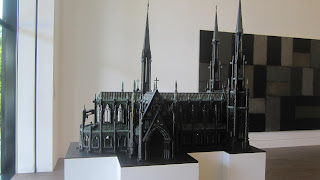 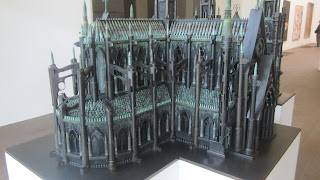 If you look closely, you can see what the components of this cathedral are - spent munitions and weapons. How's that for personal statement in art?! 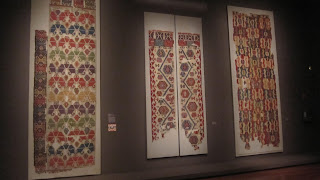 The second special exhibit that attracted me was the Kilim rugs from Anatolia, circa 1600-1900. Because there's no pile, they don't wear well and therefore there are few from this time period. 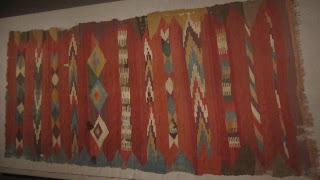 I marveled at how the colors have survived all these years. I know there has to be a connection between Anatolian rug weaving and Native American rug weaving, I just wish I knew what it is. 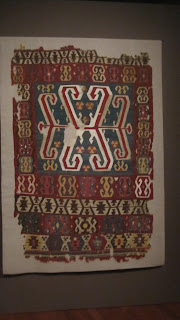 This was my favorite. 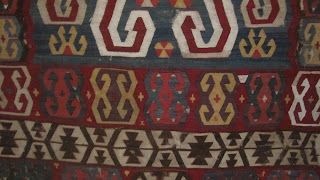 Look at this detail! 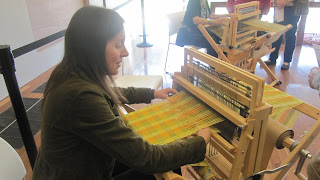 Off the atria, the museum had set up a room with activities for people with disabilities and one of the activities was weaving. 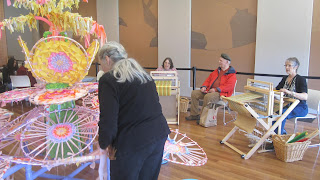 Participation was invited and the weaver now at the middle loom is a special needs young lady, doing a bang-up job, I might at. These pinwheels are also a weaving activity. 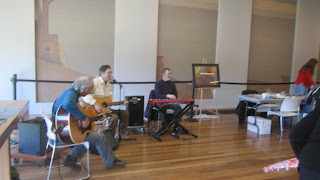 Activity tables were set up through-
out the room, but in the corner was this wonderful little combo. Their music was elastic as they read the moods of their audience, doing Raffi and Jack Johnson numbers, with dancing audience showing their appreciation. Ian and I were both moved at the gleeful abandon of the dancers, some just jumping up and down.

The drenching rain had stopped by the time we left and the public had responded in kind. We were astonished by how many people were in line for admission and equally glad that we were in the line to leave. I have visited the deYoung many many times, even in its old incarnation, and it never disappoints. We left happy.
Posted by Sharon at 8:40 PM

Great post, you have pointed out some superb details, I will tell my friends that this is a very informative blog thanks.
IT Company India

Oh you lucky dog! I would have loved that J.P. Gaultier
exhibit. Such a fantastic way to present it too. I am so jealous!

What a great day!