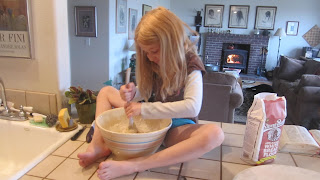 I've said many times that my mornings starts with coffee and spinning, a substitute for all the years of morning runs. It's been a good substitution. It lets the cobwebs clear out and the day to dawn. Alexia started asking when we'd make bread when I was still on my first cup. I told her when the microwave clock said 10:00, we would start. We started making bread right after breakfast! When it came time to knead, she squatted like a monkey on the counter and did a credible job. She doesn't lack for focus. 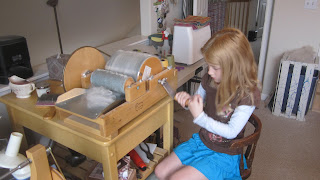 I had anticipated spending time in the studio while the yeast worked. Alexia wanted to help. I was a nervous wreck, since I've skinned myself too many times on the drum carder. She pulled up my sewing chair and carefully cranked the handle. We carded enough for me to spin another bobbin in the morning. 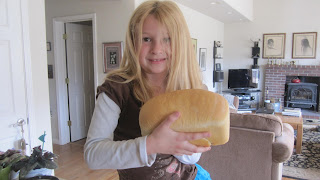 She got to pick which loaf she wanted to take home to her family and this was her choice. It takes just short of five hours to make bread and that's rough when you're seven years old. She kept turning on the oven light to check, in between asking me if it was ready. 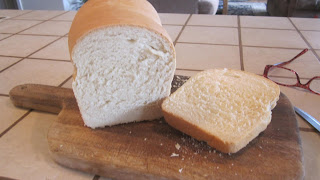 The bread turned out great. I've made this recipe from Joy of Cooking many times over the years since my father-in-law gave me that cookbook as a Christmas present so his son wouldn't starve. Ian and I had it with soup tonight after I returned Alexia to her parental units. It's very quiet tonight - the dogs and cat are exhausted, as are we. Back to normal, until the next time, and we humbly always hope there will be a next time. 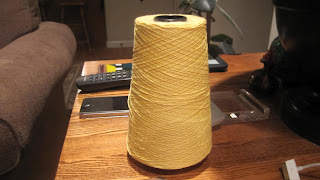 As for rabbit brush, this is what I might expect. I've gotten a more bright yellow than this, but I'd be happy with this. It all depends on the color of the wool. I think this would be from an oatmeal fleece, gray wool would give green and paper white would give National Geographic yellow. I'd also like to try sagebrush for green, but I'm highly allergic to it so if I can get green from rabbit brush over gray, I might just stick to that. It's just that I'm running out of gray wool. I'm sticking my fingers in my ears when I think what I'd get by making an indigo bath for yellow over blue. I can't hear you, la, la, la.

We have to turn around tomorrow and get this house cleaned up. We're hosting a meet-and-greet for a candidate in the democratic primary on Sunday. She is a Latina and we support many of her positions, and also her thoughts on women and minorities. We decided to stop complaining and do something - this is our something.
Posted by Sharon at 8:52 PM

I can;t wait to have a granddaughter to share breadbaking and fibery stuff with :-)
You are soooo fortunate to have that sweet little girl!!

I like that shade of yellow (at least on my monitor) and I'm not particularly a yellow person.

Yum, home made bread! Lex will remember these days for the rest of her life.

Good on you for doing the open house for the candidate!!

She must love going to grandma's house! Bread, fiber, horses, cookies... She is one lucky kid. And you are incredibly lucky to have her to teach. You can rest when she is back home. :)

Alexia is getting so big! And wow, that's some beautiful bread. Love that yellow yarn. :)

That yellow yarn is a nice shade of yellow. One doesn't realize what a wide range of yellows, some rather harsh, that you can get with natural dyes. I think with an indigo overdye, you'd get some awesome, clear greens, rather than they olivey colours of yellow over grey or with an iron modifier. Just sayin' :)