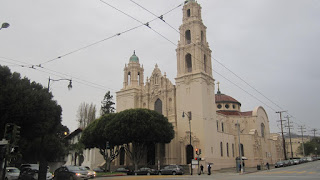 When I say that our kids live in the Mission District, I took this picture from the 22 Filmore bus stop that we use from Cow Hollow. That's the California mission. Well, the actual original mission is the white structure tucked in between the trees to the left of the church. Those overhead lines are the electric lines that power the buses. 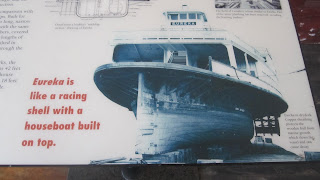 We thought Noah would enjoy the Maritime Museum and met the kids at the visitors center Sunday afternoon - last outing. The ferry Eureka was our favorite of the boats we toured. 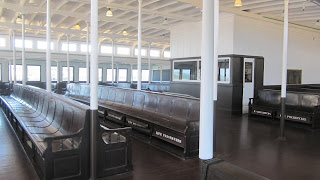 The seating capacity in the interior was aston-
ishing to me. It looked bigger on the inside than the outside. I'm standing in another section of seating. 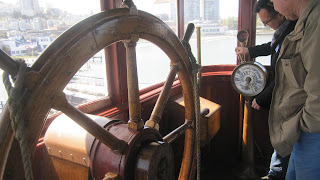 Ian and SIL Michael couldn't get over the basic tools the captain had to pilot with. 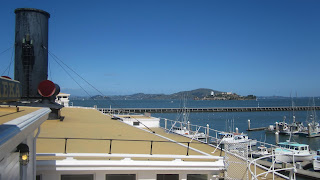 This is half of top of the ferry, which looks like the roof of an apartment complex. In the distance you can see Alcatraz Island. 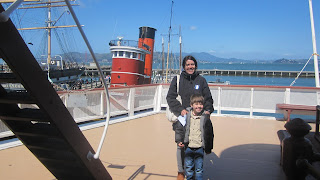 It was the right place to take Noah - he loved it! And the fantastic thing is that it's part of the National Park Service so the only charge is $5 to tour all the ships, but that was waived through Ian's senior park service pass. Little Sharon picked up the junior ranger worksheet which they worked on throughout the tour, so when we left, Noah had a Junior Ranger badge proudly pinned to his shirt. 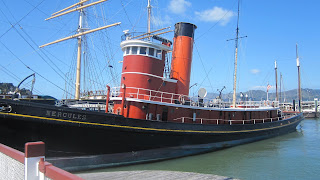 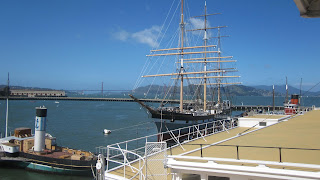 After the previous day of torrential rain, we were gifted with this fantastic, bright brisk day - perfect for touring the ships. I only knew about it because Carl Nolte had done his Sunday Chronicle column on the museum about three weeks ago.

I did this little video to show rather than tell. 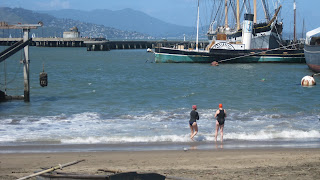 This basin is shared with a swim and row club and there plenty of both out on Palm Sunday.

The swimmers - give the woman an iPhone and she'll take a video :)
Posted by Sharon at 7:37 PM

What a great tour to take...especially with Noah!

OH what fun and what a beautiful day. We missed that during the 2 1/2 years we lived in the Bay area on our way to Oregon from DC

I'm with Noah, I have never met a tugboat that I didn't love. And that one is a beauty. Of all the tugs I've ever seen, this one is my favorite. I get to see her every time I visit MA as Crockers boatyard is very close to where my Dad moors his boat. In fact they built his.
http://2.bp.blogspot.com/-ok-jXchQ4z8/TjqGDRuBd0I/AAAAAAAAB2Q/lktC4CNHPUI/s1600/DSC_5943.jpg