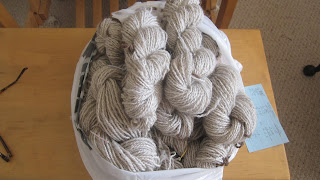 I finished spinning the light gray Romney/
cross fleece from my brother's flock - actually I have a little more fleece left but this is what I calculate I'll need to weave a lap robe. I had this fleece processed quite a while ago, and since it's not a particularly interesting color or soft for that matter, I haven't been inspired to spin it. And now I have, 1 1/2 pounds of it - here are both warp chains and weft skeins. 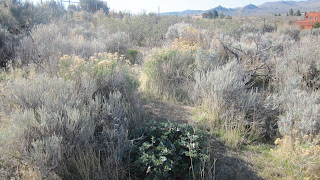 I decided to overdye this yarn with rabbit-
brush before weaving with it. The gold over gray should give me a brassy color, or even better, a military green. The bushes with the light fluffy tips are rabbitbrush. It's just starting to green up but won't bloom until September, but the dye is in the plant more than the blossoms. The green plant in the foreground is Brown's Peony. 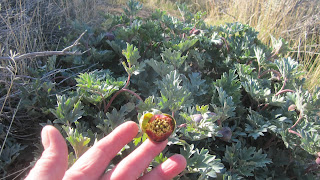 This peony is a shy plant. It's flower heads droop and never show unless you lift them to to view them. They're prevalent in the south end of the valley but this is the only one we have and it comes back every year. Livestock don't eat it so it's not particularly popular. Hmm, I wonder what color it would be in a dye pot. 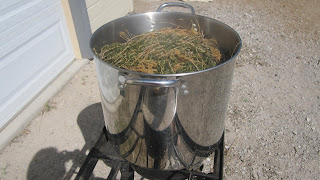 Collecting the dye stuff took about 45 minutes and it was intense work, cutting and snipping into pieces. It takes a lot of bending and stooping to get 1 1/2 pounds of rabbitbrush. And I wondered why I was so sore tonight! 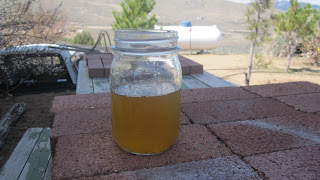 I checked the dye liquor after cooking the brew for a little over an hour. This is the last of our nice days and the weather was already starting to turn and I was starting to feel rushed. 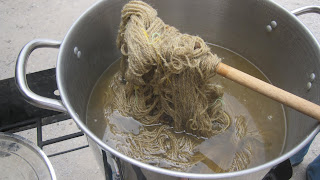 The challenge in changing weather is the wind, and after the wind blew out my burners a couple of times near the end, I realized I needed to call it good. It didn't quite get the hour it needed, but I've set it all in the garage and will leave it for the next several days where the color should intensify. I'm pleased with the color as it is and know it will look great in our living room. I had planned to gift this lap robe but I think it has parts of both my brother and me, and so it will stay here. 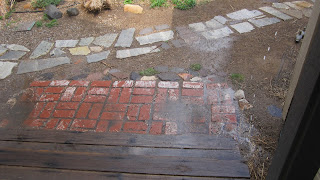 Ian helped me with the whole thing, lifting the heavy pot, straining the liquor and babysitting the burners. He helped me get that pot in the garage and took apart and stored the burners for me and not a moment too soon. We had barely finished when the storm ripped though here, mixed hail and heavy rain. 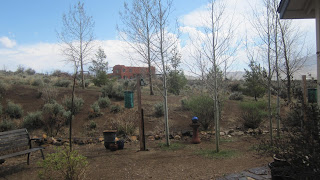 Storms come through here in bands which is very typical. We were getting drenched and our neighbors to the south of us were not. I'm not complaining - rain is welcome - but it was a close call for my project. The spring weather we've had for the past three days has thusly concluded. 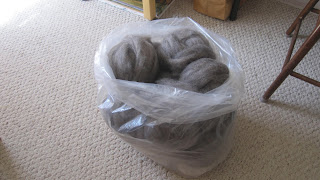 This is my new and current spinning project, the last fleece from my brother's flock. He said the ewe was a Churo/Corriedale cross. I have no idea what it is - not sure of his assessement - but it's easy to spin, has no crimp and is actually quite soft. It was make a great lap robe. I'm making a dent in that massive stash - even better!
Posted by Sharon at 8:58 PM

Oh...look at all that lovely fleece! I have to admit, I'm looking forward to seeing the yarn after it's dried.

Keep inspiring me to spin my stash! And yes, I really think you need to make your own keepsakes from your brother's flock's wool. They will mean the most to YOU - and you can designate family members to receive them when you're gone, as heirlooms.

Good for you working through that fiber stash. Thanks for showing what rabbit brush looks like.

That's a lot of spinning! Good though, that you already have uses for it. That Rabbit Brush is an interesting and subtle colour. We're so inundated with bright hues, that sometimes we underestimate the power of subtlety. I like it!
Whatever breed the Churo/Corriedale ewe is, she's got a beautiful fleece!

I can't wait to see the color that comes from that dyepot! I have been spinning up a storm too, we must make a dent in the stash!

I've been doing a bunch of spinning, well a couple pounds...more than usual for me. But mine is all pre-dyed rovings. I am excited to see the rabbit bush color, I haven't done natural dyes for so long.

Dyeing over natural colors is lots of fun. The colors are pure, but have all their own character. I can't wait to see what the color is when it is done and rinsed out.