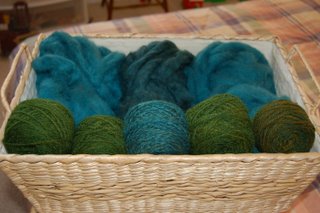 From left to right, the rovings are silver Romney, dark gray Corrie cross and oatmeal Border Leicester cross. The first two skeins are white Border Leicester dyed with rabbit brush, overdyed with spruce, a triple-ply of three colors overdyed, and the one on the right was shades of obnoxious orange from an earlier dye day, now also moss green.

At the time we were dying, I didn’t realize how much yarn and roving I kept tossing into the infernal, eternal spruce dyebath. I had a number of skeins that I have been accumulating, waiting for a chance to be overdyed. But realistically, how much of this spruce will I ever be able to use. I’ve since overdyed two of the spruce skeins with olive green. I think the roving will be going through the drum carder with something else, yet undetermined.

I like to ply up two different colors of roving before I dye the yarn to produce an illusion of luster. I like the sheen of luster long wool, so I especially like to do this with wool like Corriedale which has no luster. But three of the skeins I tossed into the pot were triple-ply: white, white dyed with rabbit brush and light moorit. The moorit turned a forest green, the overdyed rabbit brush a rich olive, but the white was mint – yuch. Just yuch. Two of these skeins are no longer spruce. Sampling would have been a good idea.

Wow!! The greens are so pretty!!