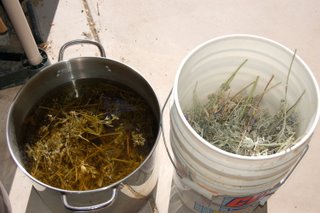 Amy thought a 4th of July dye day was a smashing idea and Mim said she could come over for a little while. I was mordanting the pound of Border Leicester when they got here at and while we were setting up – it’s a lot of work – I switched the wool to my lupine dye bath and cooked it for an hour. I’m leaving it in the garage in the dye bath for one week and then I’ll take it out. The last I checked, it was pretty disappointing. I put ¾ of the wool in a stainless steel pot and ¼ pound in an iron pot. It dawned on me after the fact that I had already mordanted the pound with alum so I’m not sure an iron pot will have any effect. I just got Navajo and Hopi Dyes: their preparation and use today from the library, borrowed through interlibrary loan. Their recipe used four pounds of lupine per one pound of wool. We shall see.

Mim had to go home but Amy and I weren’t done. We just kept getting ideas and ended up dyeing until late afternoon. Here’s some of the my new booty. 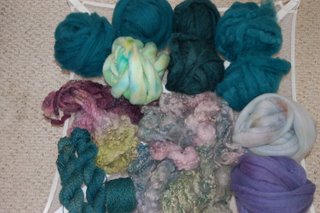 I’ve noticed that each time we dye, one color theme seems to dominate. Yesterday was all about spruce green, with purple coming in second. We all brought various dye and Amy had the green in a Desani bottle, saved from a prior dye day. There wasn’t much in the bottle and it didn’t take much. It was the dye bath that wouldn’t die. I ended up putting garment bags of roving in it, just because the dye bath was still a viable. So I have bumps of overdyed dark gray, light gray and oatmeal roving. Then I squished the leftover bits of dyes we had mixed up on Border Leicester locks and steamed them, a summary of our color pathways. When we were cleaning up, we realized that the green was probably a concentrate of Mother MacKenzie’s color, cyan. It was a very green day. My hands are green. I look like Ephelba, the wicked witch. No picture available~