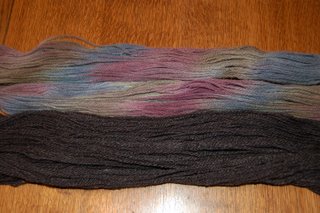 Each year our guild has had some form of a fiber exchange. Last year instead of a traditional fiber exchange, we all started with 8 ounces of white Rambouillet. The fleece had been raised by one of our members and sent off for processing. The idea was that we would all start off with the same fiber, dye it and spin it the way we wanted it, then pass it off to the finisher, who would create it into fabric as each wished. The much anticipated finished projects were distributed at the Christmas meeting.

Wes and Brenda, husband and wife, handled the planning and distribution of the exchange each year. Two months ago they moved back to be closer to family and their twin children – can't blame them, but sure miss them. They came up with a new twist (get it?) on the fiber exchange for this year. Each member purchased a sack of fiber and in it was black Rambouillet/Corriedale, white Targhee, silk, and angora fibers. I have forgotten the exact weights amounts, but the weight of my finished yarn was 5.2 ounces. I decided to divide the bunny and silk into half and card it up with both the black and white. Mim has an electric Patrick Greene and I did my fiber preparation on it. What a great spinning toy!

The yarn turned out really nice and I have rainbow-dyed the white and emersion overdyed the dark with black. But to my disappointment, the dark came out really a charcoal gray, not black. The dye bath exhausted so I think I under calculated the amount of dye I needed. I’m trying to decide now if I want to try to traumatize the wool with another dye bath or just weave it up as is. It’s destined to be a log cabin scarf – at least that is it's destiny tonight.