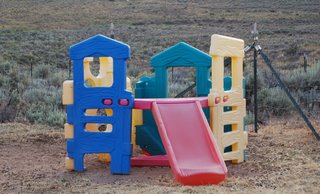 Mim suggested when we got our lambs that we put the play toy in their pen that our grandsons had outgrown. She had seen an article where someone was using a similar toy and the lambs were having the time of their lives. We thought, why not? The Washoe Zephyr wind, no gentle wafting breeze here, just seemed to blow it all over the place anyway. At this date they are no longer able to get inside or on top, but they do love to butt it around, and I figure, if they’re butting the toy, they’re not butting their shed. 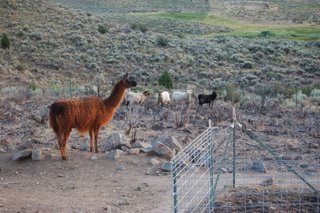 So one Saturday when Amy and I were busy dying up stuff, Ian drove up and asked if we had seen what our mama llama had gotten herself into. I was stunned to see that had put her head through one of the windows of the toy, probably to eat something she saw inside, then in lifting her head straight up, was wearing the entire toy on her chest. It must have just happened, but she was backing up across the pen with this heavy plastic, half hanging, half dragging across the pen. Llamas are wonderfully regal but not very cuddly so were concerned about how she would react to our help. As frightened was she was, she trusted us and let us lift it over her head, even ducking at the last moment to free herself. Phew~ 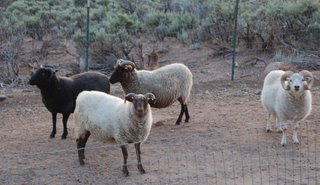 And what did the sheep do? Shetlands are like goats, busy and inquisitive, different from meat sheep. They were right in the middle and thought it all very entertaining. Do it again – that was fun. Here are the boys. They give me four colors of fleece: black, white, taupe and moorit/brown. They also give me lots of entertainment. From let to right the cast are George the Sheep (named by our grandson Logan), Mickey Mouth (because he “talks” so much), Oliver (he has a twisted horn),and Robbie the Ram (Wobbie the Wam, named by our grandson Kiernan).

I don't see why the manufacturers don't put that in their advertising. "And once your grandchildren have outgrown it, it's GREAT for llamas and sheep!"

If there is a Reno Freecycle group, you could probably put the word out as a recipient of discarded play structures! I so want to put a few Shetlands in with the burros - what do you think?