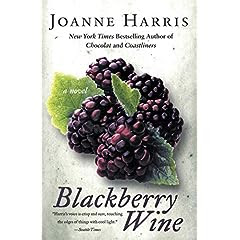 This is by Joanne Harris, the author of Chocolat. I am not a reader of fantasy and had a little trouble with the mysticism in her book. But I loved her prose and needed something to read so decided to try her again.

So Jay Mackintosh is a successful writer living in . He was raised by oddly detached and famous parents, and now finds himself experiencing detachment. Over three summers as a young teen, he had found comfort in a friendship with Joe, a peculiar old man who was an avid gardener. Joe lived with simple wisdom and practiced folk charms, all which he taught to Jay. Then Joe disappeared and Jay still feels angry and abandoned. Out of the blue, Jay buys a farm house in and moves, leaving his girlfriend and editor with no knowledge of his whereabouts. He becomes involved in village life, and encounters some familiar faces from Chocolat. As he begins to build his new life, the things he had learned from Joe come back to him, as well as the ghost of Joe, and his desire to write.

I enjoyed this book more than Chocolat, though I was glad I had read Chocolat so I knew who the characters were. I look forward to reading the next book.

Nice idea with this site its better than most of the rubbish I come across.
»