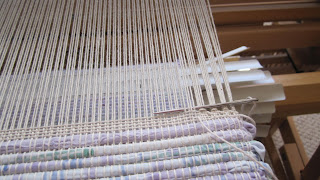 I want to share with you how I do the hemstitch. I taught myself from Virginia West's book Finishing Touches for the Handweaver. I opened her book and followed her photos and descriptions until finally it sunk into my head. I throw four shots of warp thread as weft. If I'm starting the project, I leave 3 times the width of the weft on the first row, and if I'm finishing the mat, I leave it on the last row. I start with my needle going under four warp threads, right right to left. Remember that this is for 12 epi and it would be probably six or more for dishtowels. 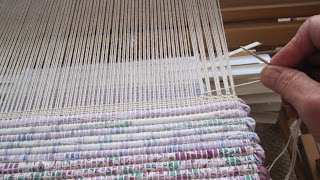 I bring up my needle and cross over the same four warp threads, snug it up a little and then put the needle back down to the backside. 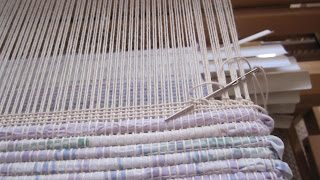 Only, I don't push it through all the way, but using the needle at an angle, I go under at the point and back up two warp rows away, which is also the same place I pulled my needle up when I started this bundle. I'm essentially wrapped these four warp threads in three movements. I say to myself under four up, over four down, under four up two rows away. 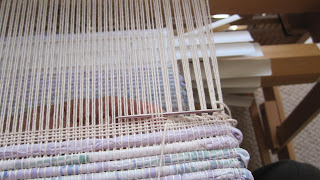 I use both hands on top of the work for the first several bouts to keep the tension, and after about five, I put my left hand under the work and push up the group of threads with my left hand. This is when I start to fly. I think the first five bouts take as much time as the entire rest of the the 13" mat. 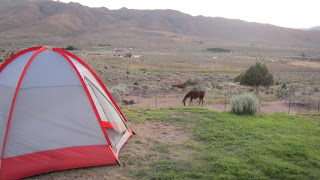 We haven't really reached fire cracker summer temps, so the llamas are still finding things to munch on. I've given up on the tomatoes ever getting ripe. The tent? Ian scrounged it and is testing it's pieces parts. We're just about three weeks away from The Gathering over Labor Day Weekend. One friend called it Sparking Boy, a derivative of Burning Man that same weekend. It's an assembly of family, friends and neighbors - lots of tents and trailers - I call it turtle accommodations, BYOT. It's become a time of coming together. More later~

What lovely clear photos! Where was this post when I needed to learn hemstitching just before last Christmas, eh? ;)

I had an epiphany about it when I picked up a curved needle - I think it's supposed to be an upholstery needle? - from my box by accident. It's a brilliant tool for stitching round a group of threads!

Back in the day when I still wove (weaved?), I learned to do hem stitching with both hands - I did the front with my right, and the end with my left.

My right and left brain regularly get into arguments, leaving me prostrated in confusion...

Hi. Thank you for describing your hemstitch. I have a small loom and, belive it or not, I just tie the ends. I'll try the hemstitch and have a better finish! Thanks again, Jane