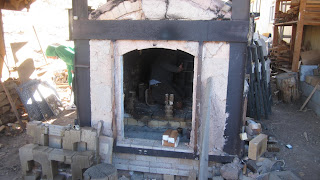 Joe called me last week - long story - but invited us to come down on Sunday afternoon when they were going to finish a wood firing. His daughter Jasmine is a first-year ceramics arts student at NAU Flagstaff and had asked her dad if they could they do this over her break. 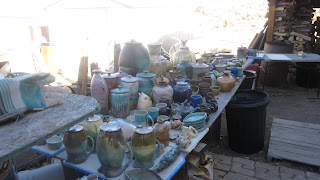 We were driving back from getting hay the same time he told me they would be emptying the kiln so we stopped by to see it was going. A wood fired kiln requires many potters to keep the fire stoked, so many potters had pieces in the kiln. 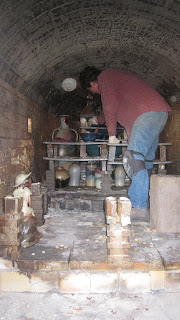 The inside of the kiln looks much larger than the outside. They had a long way to go and we had hay to unload. 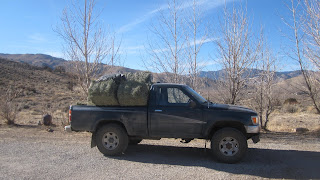 Time to go home and get on with the rest of our day. That little black bag on the top of the hay? 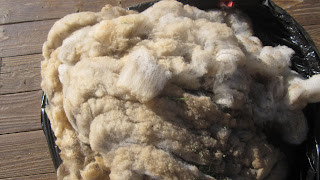 Is this. Luke handed me a bag and said it was the smallest one, since it had to ride in the cab with us. He thought it was two lamb shearings, and it is. The potential is fantastic, but I'm going to ask for a ewe sample next time we get hay. The staple length is no more than 3" at best. 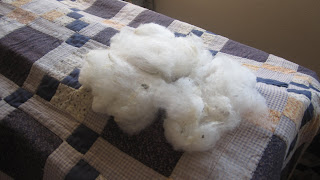 I wasn't impressed by the fleeces but I couldn't stand not to know what the fleece had the potential to be and had to scour a sample. 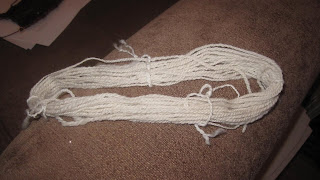 I drum carded and spun up a sample today. He has the potential to sell lovely fleeces. I hope I can help him identify the good ones and then get them to buyers. This sample couldn't be worse which tells me that he's got great stuff in that yarn barn of his. He's my neighbor in the rules out here. Neighbors help neighbors. 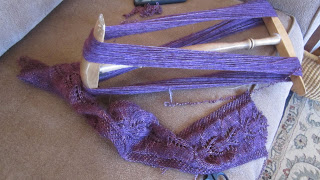 As for the purple scarf I took for trip knitting, this was the frogatage. As you can see, it was skinny and un-neck warming. 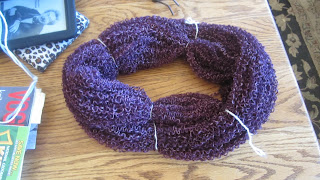 There's a lot of yarn in this worm bundle. It needed to be done. That skinny scarf was worthless. 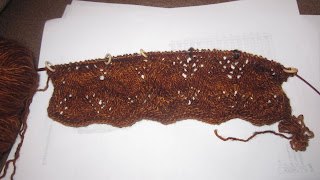 Another froggage. The knit/purl pattern I chose was gobbling up the yarn. I had to frog and this is where I am. It's working out well as a TV viewing project.

Ian and I are currently watching Michael Palin's New Europe series on Netflix. I dragged down the Atlas from upstairs to help me follow along, only he started in Slovenia. My atlas had a unified Yugoslavia. I had no idea my atlas is so old. I ordered a new one and it should be here before we watch the next episode.
Posted by Sharon at 8:45 PM

The rust colour is so very lovely, please knit something nice with it :-)

I was going to say the same thing about the purple! There's no accounting for taste, is there? :-)

One needs to order a new atlas almost annually, borders and countries change so fast in the eastern blocks and Africa. :)
I'm not a fan of skinny scarves either....

Agree with Theresa on the Atlas. Perhaps sit at the tv with the computer google earth and the wiki pages. Then the atlas money goes to wiki.

You don't say very much about the polypay yarn characteristics? The fleece (lock) looks like polypay to me...and I'm surprised that it looks that clean for not being tended for spinners.

I love real, honest-to-goodness, hand-thrown pottery. I took a class in college onit, and loved the class, but had never done it since. So I appreciate the work that goes into those pieces. What fun to see those things fresh from the kiln.

It seems as if we are all experiencing frog pponds this winter. Oh well. If we aren't happy with a project, why waste the time and yarn to finish it. Rip-it! Rip-it!