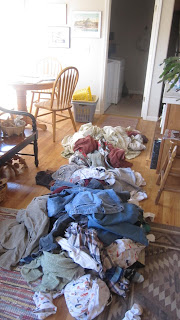 I've been without a washer and dryer now for about three weeks, and in spite of two loads at my sister-in-law's house and two trips to the laundromat, I was faced with this backlog, not including sheets and towels. It's taken two days to get through this, and today was my first load of whites in the new machines. They were white! I've never had whites like this before. The machines are electronic and startlingly quiet. We don't have to close the laundry room door to talk, which pleases Charlie since his litter box and food are in there. I'm not going to like paying for them, but I sure do like using them.

It's been an expensive month and Wednesday is what I hope is the last expense. Eleanor, my car, and I both have doctor visits. She is way past due for her check up and I'm going to have part two of mine, which was actually in December. However, I made such as mess of my lab work, that my doctor wanted a do-over. A new windshield and new tires for Eleanor and we should be on all clear. And broke. 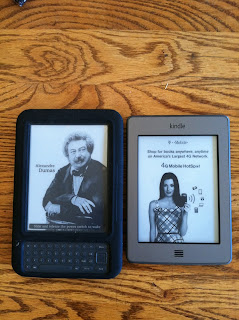 I forgot to mention than Ian got me a Kindle Touch for Christmas so we are now a two-Kindle family. He adapted easily to my Kindle 3 and we're keeping it registered in my name so both devices share one library, which is more than any two people can read. I knew I'd like the Touch but I didn't realize just how much. I'm currently reading A Tale of Two Cities for my book club and find it's pretty painless, sliding through the pages. The group wanted to read a classic this year and on my, we certainly are. They can't opt out, but as facilitator, I'm stuck so I just keep tapping the right side of my screen as I glide through this most depressing book. "It was the best of times, it was worst of times" and so far it's only the worst of times.

I joined Amazon Prime in December and we used my account to buy all our Christmas presents since shipping is quick and free. A lesser known part of that package is that you can check out a book from their Kindle library every calendar month. My January book is I shouldn't even be doing this by Bob Newhart, an autobiography. Since he was a cutting edge stand-up comedian, this is also a history of the genre - and funny. 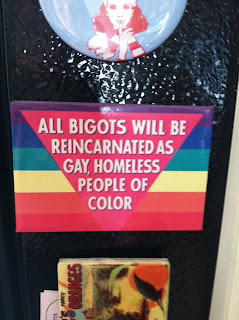 My mother was determined to provide me with a sibling in the form of a foster sister since she was too old to have children after me. After the County turned us down for having well water and worn linoleum, Mom turned to a private foster care facility for troubled children, funded by the parents who didn't want them - and so when I was in junior high school, Rebecca came to live with us. She had impetigo from the nervous habit of licking her lips and kept pulling her hair out. My mother and Becky's case worker met once a month to iron out strategies to save this forgotten little girl. I knew when Mrs. Gilliam was coming because Mother feverishly wrote notes and cleaned the house. When she came, I was invited to go outside.

The thing I've thought about in retrospect over the years is that Mrs. Gilliam wanted to save Becky as much as my mother did, only this was before the Civil Rights Legislation of 1964 and Mrs. Gilliam, though a college educated woman, did not have the right to vote because the color of her skin was black. Yet she devoted herself to saving the skinny, troubled white kids in her charge. I've had this refrigerator magnet for at least 15 years but today on MLK Jr Day, I thought of it and I thought of her. I post the picture in her honor. And yes, they did save Becky.
Posted by Sharon at 9:14 PM

You're really going to leave us hanging on what happened to Becky?!

Glad the laundry pile has been dispensed of. January is expensive here too...our 7 year old tv died. We spent $250 for a service call about a year ago...another such service call pays for a new tv. Waiting for the superbowl sales..

good luck with your appts.
And waiting to hear what happened to Becky.....

(my verification word is oweavint...must have something to do with weaving lint on St. Patrick's day?)

LOL, okay, that is one big cliff hanger, but not as big as that pile of laundry. My sympathies. You will have to let us know what Model washing machine you bought. Mine is sounding pretty sick these days..seems it isn't keen on washing horse blankets! Imagine that.

Good for Mrs. Gilliam and for your mother! That took a lot of courage to take in a troubled child like that. And I'm glad it had such a happy ending.