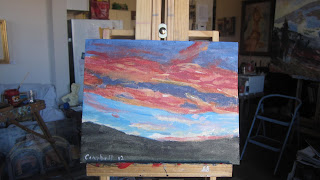 Friday I tried my hand at painting sky and I hated it. You're not really building structure as much as you're pushing colors around. So now I know. 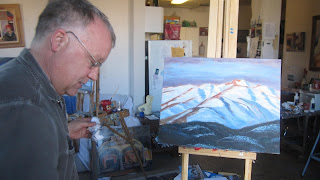 There are a couple of colors that I still haven't gotten yet, so Erik was giving me some alizarin crimson here. I asked for pointers on how to warm up the palette on this earlier painting, I figured out how I wanted to fix the foreground snow while walking Buster and now it's glazed and done. 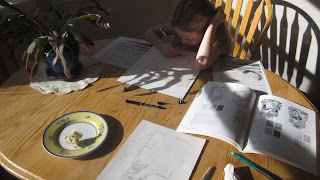 We watched Alexia Saturday night so Mommy and Daddy could go on a date. She and I spent about three hours drawing at the kitchen table. I've been practicing pen and ink strokes and showed her how. She had several pens to chose from and we so we just drew in the afternoon sun together, while Grandpa fixed her favorite spaghetti and meatballs. 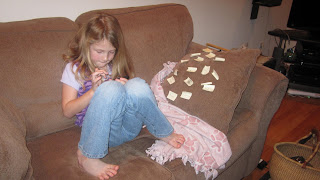 We watched several episodes of Dance Academy, an Australian TV series/soap about teens in a premier ballet academy in Sidney. We finally cut her off after five. Her post-it notes are for the next morning - more Dance Academy, breakfast, ride home and more Dance Academy and also some random pen and ink strokes. Then she played Toy Balls on my iPhone. Incidentally, if you saw the movie Strictly Ballroom, the woman who played the young gypsy dancer is the head teacher in this TV series. Love Netflix!

I haven't been spinning this year due to an elbow that is painful after each spinning session. I'm resting it and doing other fibery pursuits, including knitting some of the massive backlog of handspun yarns. I'm obviously going to have to change my spinning technique when the elbow is recovered. Maybe change sides? 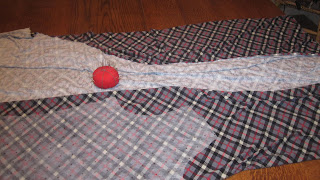 So I cut out this single knit for another tunic. I have no idea why this caught my eye at Mood, but at $14 a yard, I'm going to wear it, even it's just here. This fabric is so hard to work with. It's almost impossible to get wrinkle-free and flat. It makes me even more in awe of those designers on Project Runway who shake out a piece of shear insubstantial fabric and cut it to size. 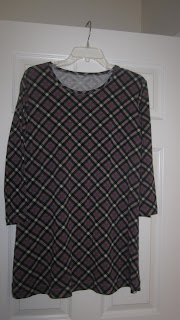 This looks just as bad on me as it does in this picture. 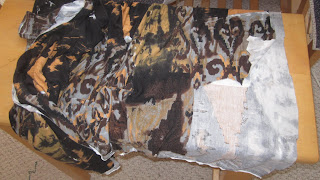 This is the next piece - kind of a modern art non-pattern pattern. I have no idea what's going to happen in the cutting. As you can see on the lower right corner, they had given someone an 8-9" swatch and didn't compensate when they cut it for me. It's been sitting for several years so I'm going to run it through the washer and dryer again before I try to figure it out.

I'm reading a couple of books at once. Okay, I never just read one, but I'm sure that's been apparent in the past.

Sleepwalking Through History by Haynes Johnson. I bought and read this about 15 years ago but it's been on my mind a lot lately so I'm re-reading it. It's the Reagan era and how it came to be and it's surprisingly relevant to now in this anti-government era, which I totally don't get. Newt insists Reagan passed the mantle on to him and he is channeling Reagan.
Last Man in the Tower by Aravind Adiga, winner of the Booker Award for White Tiger. It's complex, full of rich characters with unexpected humor. I think we'll be able to expect that from him in future books as well.

Gideon's Corpse by Preston & Child. It's a ridiculous plot-driven book that kept me up until midnight last night, and it will probably do the same tonight.
Posted by Sharon at 8:30 PM

So you've been very busy, nice!

Oh bummer on the elbow Sharon, I hope you find a good work around and can continue with it. You make some beautiful yarns. The paintings are looking great!
Thanks for the book list. I'm reading Night Circus after a period were nothing seemed to suit.

I am sorry you have had pain while spinning because I know how much you enjoy it.

You are braver than I am even attempting sewing with single knit. It slithers all over the place with me.

The art is coming along nicely. Are you going to frame and hang any of it?

As a fellow traveler (although in watercolor), I'm really enjoying your painting journey. I like that sky -- you've got a bit of everything going on, very dramatic.

Hi Sharon! Don't get discouraged with your painting yet. It does take time and trial and error before you get comfortable with a painting medium and which method will work for which effect you want to achieve. Some people water down the acrylics to a watercolor-like wash for skies. Wet-in-wet helps blend those clouds into the sky color so they look more whispy and airy. There are special mediums to add to acrylic to keep them wet longer so you can have more time to blend areas that need blending.

Keep painting, exploring and having fun!