Ian and I drove up to Bird Flat Ranch today for hay. 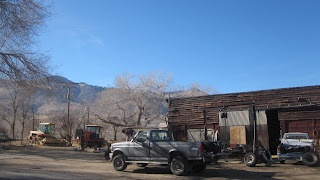 It's just six miles on the other side of Doyle. Tim and his son Luke run the whole thing by themselves, though Tim has been working this hay operation for 30 years. The ranch itself dates to the around the 1920s. 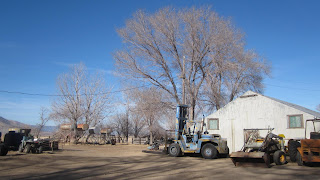 I think the ranch is beautiful and couldn't stop taking pictures, kicking myself for not packing the DSLR. The Garrod Family has a history of ranching in America dating to 1892 in the Bay Area. 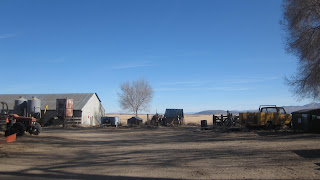 We had a conversation about horizons. Tim said when he first moved here, it took some adjustment to accept the open land and lack of trees. Now when he goes to see the family in the Bay Area, he can only tolerate it for a short time before the claustrophobia sets in - Luke agreed and I know exactly what they are saying. 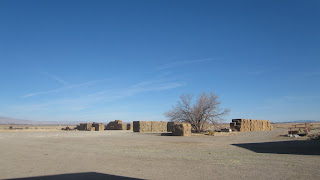 I've driven by hay before and just made a mental note. Oh, there's a lot of hay. Up close it looks a lot bigger. 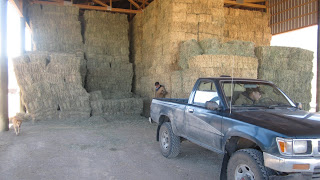 The closer you get, the bigger it looks. 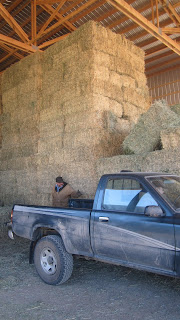 The scale of our 4-banger Toyota against the mass of hay absolutely dwarfs our poor truck. 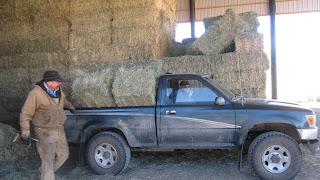 Tim loaded seven bales and said he could load more if we wanted, but you can see the hay is sitting pretty heavy in the back of the truck. It's been a long search for good hay, but we've found what we were looking for. The hay is good, the animals don't waste any and it's $4 cheaper than in town. They don't deliver but that's okay. I'm already looking forward to going back. 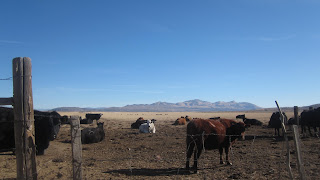 I think this is beautiful and sometimes I have to stop to remind myself - I'm here because this is where I live. I'm not on vacation. This beautiful land is home.

In the middle distance are sheep. They also have a herd of Polypay they raise for meat and hides. As we were leaving Luke gave me a fleece to sample. He's hoping to be able to find a market with hand spinners and recoup some of his shearing expenses. I was glad to oblige and will give him feedback the next time we're there.
Posted by Sharon at 8:40 PM

A good source of hay is peace of mind when you have herbivores. We need to find some more. :-/

Pay. PolyPAY. I guess with the strain our finances are in, I'd rather have a PAL than have to PAY.... :-/

Oh good hay is hard to find these days. I got a heads up last week that are usual go to guy if we run short in the spring is already out of hay. We have plenty in the barn but you never really know when first cutting will be, so if we run out it's 12-14 per bale if we can find it come late spring. We feed a bale or so a day....OUCH!
Can't say I could ever get use to a lack of trees to live in, but big sky country certainly has it's own draw and beauty.

I'm glad you've found such a good source for your hay...and a beautiful spot to visit to boot!

I've spun Polypay before and I liked it. I'll be curious what his are like.

The scenery is incredible. I've never had a chance to spin Polypay. Please do give a report on it!

Lovely photos!! Oooooh...if it's good polypay in can be fun...very springy with a close, disorganized crimp.

Hope the wool he raises is as good as the hay!

Such beautiful skies in your photos! (And so much sky!) Gorgeous!