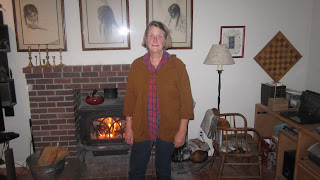 I finally finished this sweater. I started it in June and should have finished it a long time ago but somehow I wasn't happy with it. I got the latest Vogue Knitting and some knitting catalogs after we got home and realized that I didn't want sleeves to the wrist, so I tore them both back and finished them below the elbow. Then I tore out the bottom ribbing and added all the yarn I had until I ran out.

It's actually supposed to look like this and that's what I love about Diane's patterns. You can make them to work for you. It looks lumpy and unfinished because, you see, I do not have a washing machine or dryer. That phone call I got for appliance delivery was very confusing. The truck came but they only had a dryer. It was a part of the order that I had canceled that didn't get cancelled. I had originally started to order replacement appliances online, until I learned that if I went into Sears and opened up a credit card, I'd get a serious price reduction. I cancelled that online order, went into the store, opened the card that saved me $210 and am just days away from getting my fabulous new Best Buy appliances as rated by Consumer Reports. I'll get my sweater washed and blocked after that. Well, actually after I wash the literal mountains of laundry that we have stashed everywhere. And that's in spite of two trips to the Laundromat. 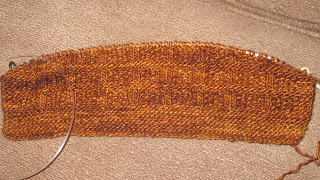 I've also started a new scarf from this Madeline Tosh yarn that's been upstairs for a year or two. I bought it for a scarf and then realized that I never wear scarves - until I made the discovery last month that I don't wear ornamental scarves. Flat scarves that warm my back and neck I've come to the conclusion are imperative, and I have just two of said items. 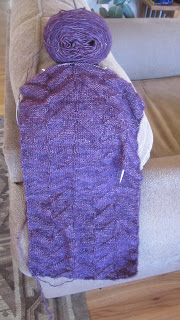 This was the scarf I took for trip knitting. The pattern requires constant concentration so I came home with about 5" completed. At one point my metal ring stitch marker migrated and when I realized it, I had to tear out two precious inches.

So why this sudden flurry of knitting? The evening we arrived in Oceanside was the same day they had taken baby Gus to urgent care for ear infection and URI. The day we got home I awoke with the first cold I've had in a year. I spent about four days on the sofa, under the influence of Dayquil and/or Nyquil. I watched a lot of documentaries and I knitted. And now that I'm much better, I have a finished sweater - soon to be washed and blocked and worn - finally.

Our book club met today for A Dog's Purpose which really wasn't a book for club book discussion at all, yet we spent two hours talking about it. Annie enjoyed the book and had emailed me some suggestions for discussion so I took them with me. Think of it! Thanks to the blogsphere, she contributed to a book club in Nevada, all the way from The Netherlands.

Here's a teaser from the author. I was skeptical when I started the book but then ended up reading it in a day.

I was going to end there because it seemed like a perfect chapter closure, but in the strangest of all strange worlds that I live in, I'm sure you want in. In our beautiful valley of Eden, there is a snake. Just one. Nevada's gift to the United States of America is Karl Rove. Yes, indeed, right here in River City. He is a local boy. And his brother now has a residence in our valley. Ian, whose military training was in surveillance began noticing on his morning drives with the dogs that on occasion that house would have a cluster of black SUVs. They're all over Washington DC but not so common here. Most of us eschew black vehicles on dirt roads.

It was after a lawyer who used to live here moved from his rather post digs that Ian began reporting these SUV clusters. I listened with half an ear. The thing is that all of us who know Ian get this earful, and in the end he's most usually right. I hate it. Eric Rove - I didn't put 2 and 2 together on my own - Eric s a combative resident who hates the horse and hound rides and is a thorn in the side for the Red Rock Hound hunts, which I and my dogs love. I just want everyone to be nice and get along, but Eric isn't nice, especially when it comes to the horse rides. And he tailgates. That makes me cranky more than anything. When we all try to develop a neighborhood out here, it hurts to get it thrown back in your face.

Ian has insisted for the last year that Eric's house is a retreat, based on the black SUVs from time to time. Yesterday he told me was another black SUV day. Today the newspaper reported that Karl Rove spoke to the Prospectors Club in Reno. I can tell you now that you can Google your hearts out and you won't know another thing about that club. It's a black cluster of casino and Republican leaders in Reno - word. I feel betrayed. I want Eric to move. He's not a good neighbor.
Posted by Sharon at 9:32 PM

Oh Sharon, my heartfelt sympathies on the new neighbor. I didn't like GW much at all, but never pegged him for a cruel person, but Rove and Cheney have enough cruelty in their collective small fingers for most of the world. Sounds like the whole Rove clan might belong in a snake pit somewhere..else.

Glad you liked a Dogs Purpose, I read it last year and loved it. I don't think I could tackle it again right now.
Hoping the real W/D set come soon, very soon.

I am ready to have NO neighbors.
And I loved Dogs Purpose.

IMO...Carl Rove = the personification of evil. Am so sorry that the serpent has entered Eden. shudder.

The sweater is cute...looks like a different color for you?

Hope the w&d come soon so you can "summit" Mount Launderest!

I really enjoyed reading the book and was thrilled to be able to contribute to your book club discussons!

Well, certainly not a fan of Karl Rove, and sounds like the brother is not any better..... you know what they say about neighbors!

I love the colour of your sweater it looks good on you.
And the scarf, yummie :-)

Ewwww!! You have a Rove for a neighbor - and one of those Roves. Yes, you have a snake in your valley and a poisonous one, too.

That said, I love the purple scarf. Too bad about the fogging it had, but it will be lovely when it is done.

I rarely knit a pattern as written - even if I am the one who wrote it. It looks comfortable.

Love the sweater modifications. I found the sleeves on the original just a tad too long, preferring sleeves that don't go past my wrists.