Such a Winter's Day 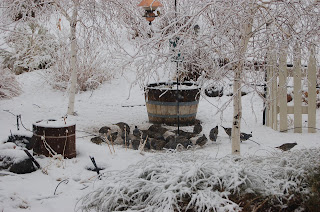 We've finally gotten some snow, the fourth of this water year. It's keeping Ian busy, filling the bird feeders. We feed many mouths here. What the songbirds don't get falls to the ground and is snatched up by the quail. 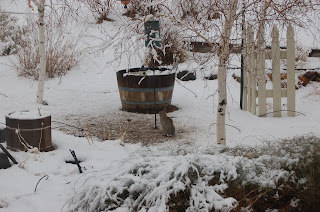 And what the quail don't eat, the cottontails do. I can't keep them out of the yard so I'd just as soon they eat fallen seed than dormant plants, though most everything is inside rabbit guard cages for the winter. 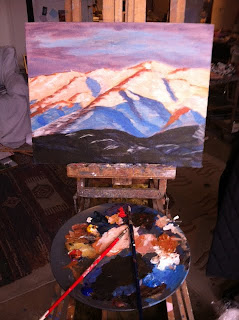 I chose a photo of Peterson Mountain for the exercise in my second class. The first class was about seeing everything in three tones, or even five, and this class was about seeing things as 70/30%, and because the horizon in my photo was right in the middle, Erik told me crop it. I marked the cropping but seeing the entire photo confused me. The painting wouldn't come together and Erik asked me why I thought I this one was so difficult. I didn't think about the cropping until later. 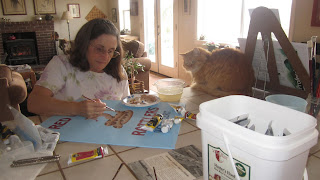 Sandy came over today and we painted together for a couple of hours. We have a lost of fantastic natural light in our house. She's working on a sign of our CERT team mascot - we're the Red Rock Rattlers. 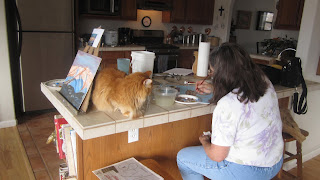 Charlie wanted to be part of the action. As long as he stayed put, it wasn't a problem but he became obsessed with drinking from our water bowls. I'm using my dad's old table easel. 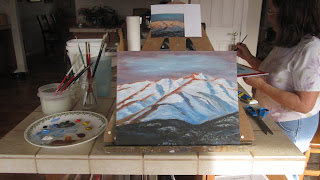 You can see my photo taped above the exercise and how I taped over the areas I was cropping. I painted out some areas and lightened the palette and am going to stop for now. I'll have Erik help me with it on Friday, or if time doesn't permit, at least critique it so I can repair it later.

I love acrylic because you can paint over the problems, no sweat. I just wish I could figure out what I want to paint instead. It's all part of training my eye.

I found some more archival things yesterday, including four non-sequential pages from my grandmother's journal. I have no idea why I have these or where the rest are:

"At this time I rec'd a letter in Dawson- asking if I would like to see the Fair and sell tickets - which I did. I left Dawson the day after Xmas - making the 500 mile trip over the frozen trail to White House, from there to Skagway via train to Seattle by boat. I picked up a dog team there and took it to St. Louis. It was there that we put our dog teams together and were married."
(Grandpa had an exhibit at the St. Louis World's Fair called Eskimo Village.)
Posted by Sharon at 5:12 PM

Your paintings are just amazing! What a talent.

It finally feels like winter when the snow arrives, doesn't it?

BTW, I read your post about local politics a while ago, and your quip about black SUVs was pretty funny. Paul and I both drive black SUVs in the city -- it's the perfect color to camouflage all the bumper dings you get from parallel parking! My old sedan's tan bumper quickly turned into a mess of tan with black striations.

The snowfall is very pretty. The birds are feasting! Our birds only come to the feeders when it's snowy. With such a lack of snow, I've hardly seen any wild birds at all this winter. We don't get the quail. I did have 12 Mourning Doves the other day though, when it was very cold and we had some snow cover.

The painting of Peterson Mountain looks very cold - like it's winter and frosty out there. I love the lighting and the shadows. They are very effective. I do like your helper kitty too.

What a delightful entry in the journal. Lives were so different back then, and our lives will seems different to those comin after us.

I sure do enjoy your photos. Love the snow and birds. We don't have any snow just lots of rain.

Your paintings are amazing. Such a talented lady!!! I've only worked my way through "Drawing From The Right Side Of Your Brain" but did enjoy it.