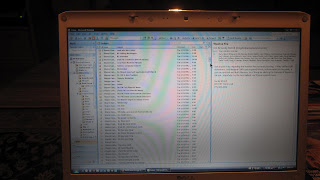 Our ISP has funneled the email part of their service through Google and I'm trying to follow directions to get my computer and phone to work. I turned on my computer this morning, anticipating a call to our ISP for assistance, when suddenly emails began to download, and download. In the end, I had something like 800 emails. I couldn't deal with it as I had lost a contact in my eye last night and wanted to have my eye doc see if he could see it since I certainly couldn't. I decided to make a Costco and Trader Joe run to justify the gas expense.

My friend Melissa called while I was driving in and we ended up going for some Macy's therapy. She needed some cheering up and we always have fun at that store. Today we browsed handbags. You have to laugh at the price tags, if nothing else. When we left the mall, she said I smell smoke and so did I. 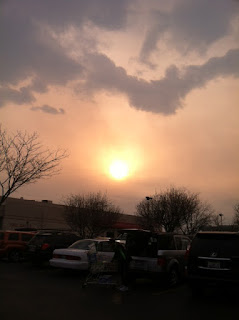 I returned Melissa to her coffee house, got my eyeball checked, then did my shopping.

There was a reason we smelled smoke. I listened to NPR and every half hour got an update on the fire. It started south of Reno and was being fanned by the terrific winds, pushing in the storm front supposed to hit tonight. I had to fight the car door to keep it from being ripped off its hinges. Gusts in excess of 70 mph were reported at the airport and flights were being delayed or cancelled. My last stop in Reno was Costco and when I came out, the smoke was choking. You couldn't see the mountains and barely the sun. 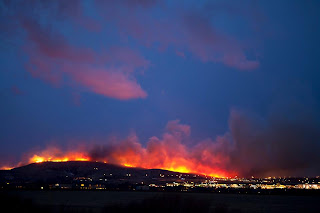 I snagged this image from Facebook. Like the rest of the country, we've been warm and dry, until last week when night temperatures hovered around zero. They confirmed 3,000 acres burned, 20 homes lost and one fatality. Horse evacuation has been a crisis. The fairgrounds can hold 400 and outlying ranches are offering accommodations. Our VFD truck was headed south as I drove home, about 5:00. It's Thursday, our VFD guys have worked all week - and now they're fighting a fire all night. I'm concerned and I want them to be safe. I wonder how that works when they're supposed to be at work tomorrow.

Meanwhile, I got a text from Ian when I was at the grocery store - last stop before home. He'd heard that North 395 was closed both ways due to a pile-up, and warned me to take surface streets. It turns out that fifteen vehicles and two semis had collided in white-out conditions when the gusts blew alkali across the highway, reducing viability to nothing. Eight are hospitalized. Whadda day. I was glad to get home in one piece.

As for the massive email downloads - I was able to take a look at it this evening. It was all the email that I had sent or received from my smart phone, dating back to 2009. Think about that when you put something in an email. It's out there. Somewhere. 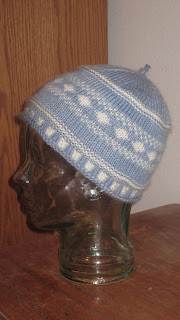 On a more pleasant note, I finished another UNC school spirit garment, this time a hat for our grandniece. I'm going to suggest to her mother that she take the Christmas hat and trade McKay for this one. I think it will be cute for the two kids to have spirit apparel.
Posted by Sharon at 9:34 PM

I was just hearing about the fires on the news this morning...and my thoughts went to you and your little valley. I'm glad to hear you are OK.

Like LA my thoughts went immediately to you when I heard of the fires. Glad you're all fine.

That is some fire, lots of buzz here among the VFD too.
OMG equine evacuations are a bugger. I know not all my guys are good trailer loaders and time can be of the essence. Glad you are home safe and sound. That's a beautiful hat!

I read about the fires this morning on the web and thought about you. Glad it is not in your immediate area, but so sorry for those people in its path.

Funny about all those emails. I guess they never really go away.

Lovely hat! That color of blue is really sweet.

Glad you made it home safe! That same day we could smell smoke from my front porch, it could have been a brush fire but it never went anywhere and no one ever saw it.
That is an awesome picture! I'm going to try to get down to visit in the next couple of months, hope to get to see you!

That is a lovely hat- glad the fire is not in your area - hope the winds have died down. T.