Working up to New Years Eve 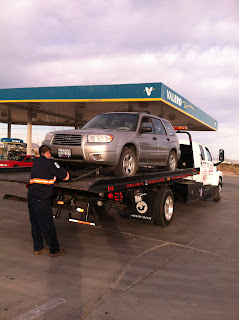 This is our car in Adelanto. 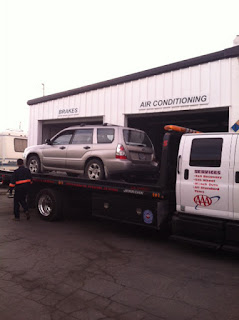 This is our car in Victorville. 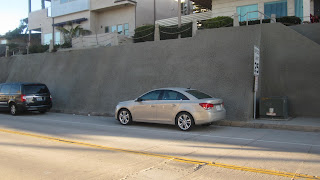 This is our ride to Oceanside.

I guess it falls into the category - into every life a little rain must fall. We left Reno 5:00 a.m. on December 29th driving south on Hwy 395, having decided to power through the 10-11 hour drive to Oceanside. We figured it would be like a long work day, and after all, we would be trading drivers. Alexia was an absolutely model child for the entire time. One the complexities of that route is the dearth of eating places. It was after 2:00 when we got to Adelanto and the end of 395. We ate at Bravo Burgers, changed drivers and I'd only gone two miles when I heard how loud the fan was roaring, then noticed that the gauge was pegged on hot. We traded again and Ian drove us after to where we had eaten, and where there was a gas station, a rare breed along Hwy 395. Much of that highway is desolation so we're were feeling pretty fortunate.

Steam was pouring from under the hood, apparently more dramatic from the coolant hitting hot engine, but it was clear the car was disabled. I went into the gas station and asked if they knew of any tow services while Ian released the pressure from the radiator. We had a AAA tow truck within 10 minutes - he told Ian was just getting ready to drive a car to a spot about 90 minutes away so came to help us first. He towed us to a AAA garage in Victorville. Alexia was so scared but the tow driver explained carefully how he had made our car safe and she managed to get her tears under control.

At the garage, the guys took over, ordered the radiator, thermostat and hoses and said they'd get on it first thing in the morning. When they understood our trip, they suggested rather than rent a motel room that we rent a car and get down to Oceanside, which is what we did. Ian drove back the next day. 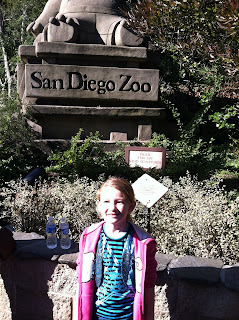 While Ian was in east-bound traffic on the I-15 with all the folks headed to Las Vegas to celebrate New Years Eve, we went to the San Diego Zoo. He said it took three hours going and two returning. The zoo was DS Dougie's idea and I'm sorry Ian missed the opportunity to visit with his son - we had a wonderful time. 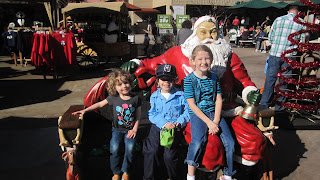 This trip was really for the kids. I've seen this zoo many times and it was fantastic to watch the cousins enjoy it. 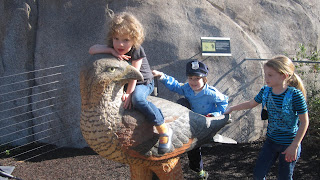 They were complete hams and wanted pictures taken at every photo station. Noah had gotten a camera for Christmas and Alexia wanted to pose. I'd love to see what's on his camera! That's not to say that they didn't enjoy the animals. They loved them, especially the gorillas. 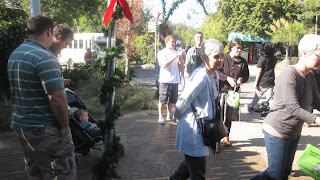 This is all our group, eleven of us, including four children. Even though buses and trams were part of our admission, we chose to walk and talk and make memories. 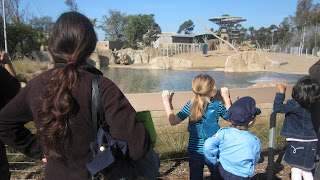 The zoo meets and exceeds its reputation, and good thing since it costs as much as Disneyland. However, these elephants aren't animated. They've added mikes in some of the cages so the children can hear the animals in real time. All of this and we were just into our second day of the trip.

We just got home this afternoon. I'm so excited. We had a message on our phone from Sears saying that they will deliver the washer and dryer on Friday, a week early. We have SO much laundry. We'll be eating rice and beans for a while, but we are rich with memories from the last week. I want to share the beach next. I take it for it for granted since I grew up with it, but Alexia saw it for the first time. I forget how fortunate I am to have grown up on the West Coast.
Posted by Sharon at 6:38 PM

What a wonderful trip and good for the repair guy taking time with Alexia. I grew up going to the Atlantic all the time, but the first time I saw the Pacific I was so excited. And I was an adult!

Wow...glad you caught the car problem before you were out in "no man's land".

Sounds like a good trip despite the "rain". Happy New Year!

Well, thank goodness the car chose a reasonable place to collapse. Could have been really unpleasant.

I too take the beach much for granted, having lived on one ocean or another for almost all my life. Had 2 years in Phoenix, AZ though. Yurk! Never again.

Oh no! Sounds like Ian was a real trooper about getting the car, and thank heavens things went as smoothly as they did.

Happy New Year to you, Sharon.

Glad your trip worked out after all!

Rice and beans are good.
And memories better.